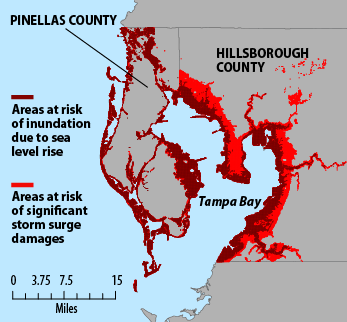 Areas at risk from sea level rise and storm surge in the Tampa Bay area in 2100 under the Reference scenario.

Coastal areas in the U.S. are some of the most densely populated, developed areas in the nation, and they contain a wealth of natural and economic resources. Rising temperatures are causing ice sheets and glaciers to melt and ocean waters to expand, contributing to global sea level rise at increasing rates. Sea level rise threatens to inundate many low-lying coastal areas and increase flooding, erosion, wetland habitat loss, and saltwater intrusion into estuaries and freshwater aquifers. The combined effects of sea level rise and other climate change factors, such as increased intensity of coastal storms, may cause rapid and irreversible change.26

Sea level rise and storm surge pose increasingly large risks to coastal property, including costs associated with property abandonment, residual storm damages, and protective adaptation measures (e.g., elevating properties and armoring shorelines). As shown in Figure 1, the analysis estimates that under the Reference scenario the cumulative costs for coastal areas across the contiguous U.S. will be $5.0 trillion through 2100 (discounted at 3%) if no adaptation measures are implemented. If adaptation measures are taken, these costs are reduced to $810 billion. Projections of increasing risks of sea level rise and storm surge for coastal property, and of the potential for adaptation to reduce overall costs, are consistent with the findings of the assessment literature.27 The graphic above illustrates the importance of these potential impacts at a local scale by identifying at-risk land in the Tampa Bay, FL area. In this locale, approximately 83,000 acres are projected to be at risk of inundation due to sea level rise by 2100, and an additional 51,000 acres are projected to be at risk of significant storm surge. The total area at risk (130,000 acres) is approximately one and a half times the size of the City of Tampa.

Figure 1. Costs of Sea Level Rise and Storm Surge to Coastal Property with and without Adaptation under the Reference Scenario 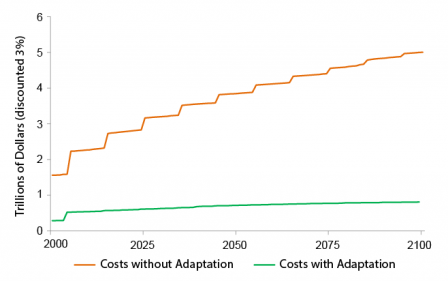 The step-wise nature of the graph is due to the fact that storm surge risks are evaluated every ten years, beginning in 2005. Costs with adaptation include the value of abandoned property, residual storm damages, and costs of protective adaptation measures (trillions 2014$).

Under the Mitigation scenario, total costs (i.e., property damages and protective investments) across the contiguous U.S. are estimated at $790 billion through 2100 (discounted at 3%), about 3% less than the Reference scenario.28 The effect of global GHG mitigation in reducing adaptation costs is modest and is likely underestimated in this analysis for several reasons. First, as described in the Methods of Analysis section, global sea level rise is similar under the Reference and Mitigation scenarios through mid-century. It is not until the second half of the century when the benefits of reduced sea level rise under the Mitigation scenario become apparent. Further, the proportional effect of global GHG mitigation in reducing the rate of sea level rise is smaller under the CIRA scenarios compared to other scenarios in the literature.29

Second, when considering the present value total cost under the Reference and Mitigation scenarios, avoided adaptation costs accrued in later years are more heavily affected by discounting.30 Third, the analysis assumes that coastal areas will implement cost-efficient and well-timed adaptation measures in response to the risks under both the Reference and Mitigation scenarios. Since many parts of the coastline are not sufficiently protected today, and because adaptation measures that are taken are oftentimes not well-timed, the CIRA estimates for this sector likely underestimate damages. For comparison purposes, the benefits of global GHG mitigation increase by a factor of ten if adaptation measures are not implemented.

Figure 2 shows the costs of adaptation for coastal properties (including the value of properties that are abandoned due to the severity of sea level rise or storm surge damages) for 17 key sites under the Reference and Mitigation scenarios. As shown, costs are only modestly lower under the Mitigation scenario. Costs vary across sites primarily due to the value of property at risk and the severity of the storm surge threats. For example, adaptation costs are comparatively higher in sites, such as Tampa and Miami, where there are many high-value properties in low-lying areas and high levels of storm surge are projected in the future.

Figure 2. Costs to Coastal Property of Sea Level Rise and Storm Surge through 2100 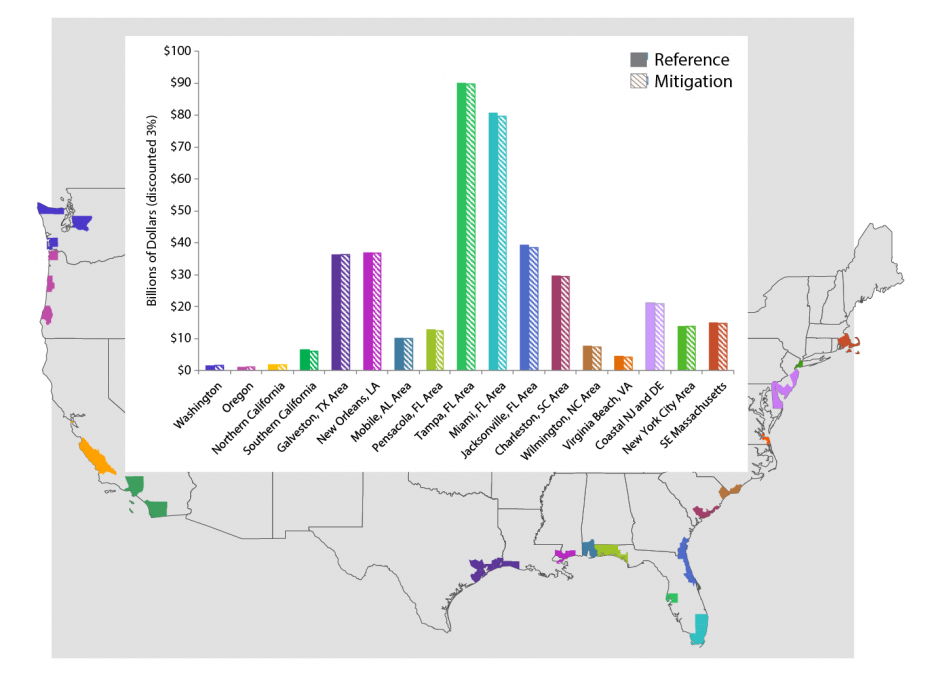 Costs are shown for 17 multi-county coastal areas that were modeled for storm surge impacts and potential adaptation response (billions 2014$).

The CIRA analysis identifies at-risk coastal property across the contiguous U.S. and estimates the costs that would be incurred due to climate change, with and without adaptation. Importantly, impacts to other coastal assets (e.g., roads) and ecological resources are not estimated. The analysis relies upon sea level rise projections through 210031 that account for dynamic ice-sheet melting based on a semi-empirical model,32 and are adjusted for regional land movement using local tide gauge data.33 The analysis then uses a tropical cyclone simulator34 and a storm surge model35 to estimate the joint effects of sea level rise and storm surge for East and Gulf Coast sites, and an analysis of historic tide gauge data to project future flood levels for West Coast sites.36

Using EPA’s National Coastal Property Model, the CIRA analysis estimates how areas along the coast may respond to sea level rise and storm surge and calculates the economic impacts of adaptation decisions (i.e., damages due to climate change). The approach uses four primary responses to protect coastal land and property: beach nourishment; property elevation; shoreline armoring; and property abandonment. The model projects an adaptation response for areas at risk based on sea level rise, storm surge height, property value, and costs of protective measures. Developed using a simple metric to estimate potential adaptation responses in a consistent manner for the entire coastline, the estimates presented here should not be construed as recommending any specific policy or adaptive action. Further, additional adaptation options not included in this analysis, such as marsh restoration, may be appropriate, and potentially more cost-effective, for some locales.