What is the role of states in regulating underground storage tanks?

EPA recognizes that, because of the size and diversity of the regulated community, state and local governments are in the best position to oversee USTs:

How do states receive program approval?

Once state legislatures enact statutes and state agencies develop regulations in accord with EPA requirements and put other necessary components of a program in place, states may apply for formal approval. EPA must respond to applications within 180 days.

A state program is approved if it is judged to meet three criteria:

What must states do to apply or re-apply for state program approval under the 2015 underground storage tank regulation?

Under the 2015 state program approval (SPA) regulation, the 38 states plus the District of Columbia and Puerto Rico, which currently have SPA, must reapply by October 13, 2018 in order to retain their SPA status.  The remaining 16 non-SPA states and territories may apply for SPA at any time.

EPA’s regional offices coordinate the state program approval process for states and territories under their jurisdiction.  EPA regional officials will work closely with state officials while states are developing their programs.

This flowchart and table, which describe the process for states to apply and re-apply for SPA under the 2015 UST regulation, will help states and territories develop their state program approval applications.

A state’s SPA application must include these six components.

After EPA approves a state’s application, EPA regions will publish notice of the final approval in the Federal Register.

Which states have approved programs? 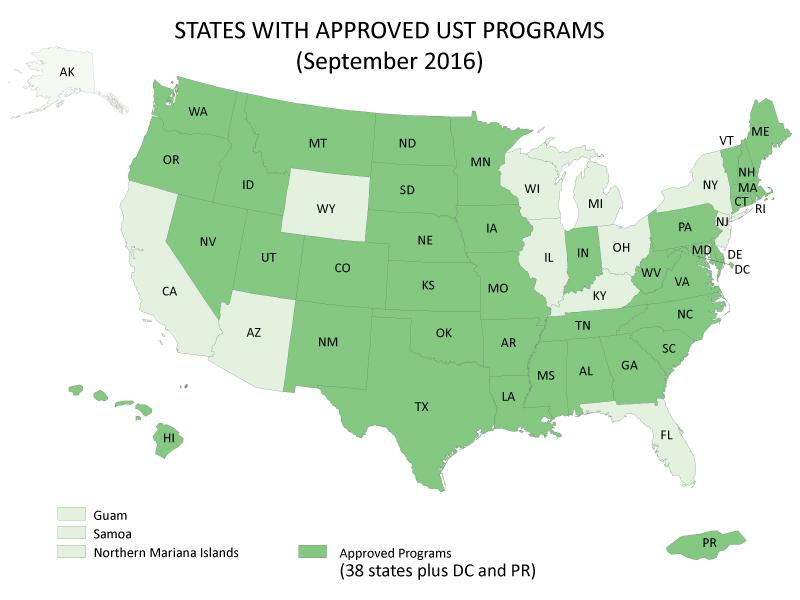 What are the benefits of state program approval?

Owners and operators in states that have an approved UST program do not have to deal with two sets of statutes and regulations (state and federal) that may be conflicting. Once their programs are approved, states have the lead role in UST program enforcement. In states without an approved program, EPA will work with state officials in coordinating UST enforcement actions.

If need further assistance, contact the EPA regional office or the UST/LUST program in your state or territory. The program office is usually located in the state environmental agency. Program staff will provide information or referrals.