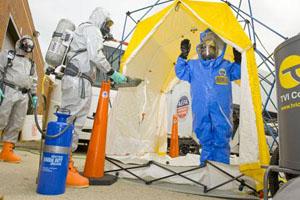 From a mailroom to a newsroom and even a Congressional Office Building, the anthrax attacks of 2001 created widespread fear, while also killing five people, making 17 more sick, and forcing nearly 30,000 to be treated or take precautions. Before these offices could be reopened, they needed to be decontaminated. Cleanup efforts involved hundreds of local and federal government employees as well as many contractors, and costs were estimated to be in the hundreds of millions of dollars

Bacillus anthracis, the formal name for the bacterial organism that causes anthrax, forms microscopic spores that are difficult to contain and difficult to eradicate.

The anthrax incidents demonstrated how challenging it can be to clean up large-scale sites contaminated by a biological agent. In a collaborative effort led by EPA, researchers tested and evaluated decontamination methods in the event that spores, such as anthrax, would be released in a building.

Researchers released Bacillus atropheus—a nonpathonogenic anthrax surrogate—in a two-floor test facility that contained mock-ups of typical rooms found in residential and commercial settings. Some of the rooms were designed as business offices while others were laid out like small apartments. Each scenario included materials that required decontamination such as carpet, fabric, and wood. The variety of materials allowed researchers to test the efficacy of each decontamination treatment under three different conditions.

The research also evaluated potential re-contamination risk due to reaerosolization (i.e., re-suspension of spores that have landed on surfaces) as the result of people moving around the facility during cleanup activities.

“This research provides decision-makers, such as Federal On-Scene Coordinators or state public health authorities with decontamination method results and costs associated with each method to compare to their specific situation and apply accordingly,” Ryan adds.

According to Donald Bansleben, Federal Program Manager, Science and Technology Directorate at the U.S. Department of Homeland Security, “The value of the BOTE research is that now we’re able to determine what decontamination technology is preferred in a relatively ‘clean’ environment, the economics of those clean-up technologies, and the  operational parameters (temperature, relative humidity, concentration over time) that must be met for the technology to be effective in eradicating the deadly spores.”

In the second phase of the BOTE study, researchers and responders from several government agencies also mirrored a potential real-life scenario of a covert release in an exercise where surrogate spores were detected. The exercise tested the coordinated response of health officials, law enforcement and, finally, the environmental response.

Because BOTE included partnerships with several government agencies, the methods have been shared with the entire homeland security community. “This research has been truly an interagency effort, “says Ryan.

The next major challenge to keeping our communities safe includes developing decontamination techniques for use in the clean-up of an outdoor, wide-area such as a city or other urban environment.

While the anthrax letter attacks of 2001 are considered the worst case of bioterrorism in U.S. history, the impact was relatively small compared to the potential illness and death that could result from a large-scale bioterrorism event.

EPA researchers are continuing to work with a variety of federal partners to develop and test the methods and techniques that would be needed to not just decontaminate, but prioritize decontamination of a wide-area bioterrorism incident.

“A wide-area attack would likely result in contamination - both indoors and outdoors - that would need to be cleaned up,” said Bansleben, who also oversees the Scientific Program on Reaerosolization and Exposure, or SPORE, at DHS. “We would need to decide what the decontamination priorities would be in a wide-area attack, focusing on critical infrastructure first, since hospitals, water, sewage, power plants, transportation nodes and government services, etc. would need to be up and running quickly.”

“The BOTE research is relevant and important to a wide-area event because those techniques and methods would be used to decontaminate buildings within the contaminated region and provide a cost analysis for cleanup of each building,” he adds. “Further efforts will focus on finding and testing other practical, low-cost techniques for decontaminating areas like streets, parks, yards and vehicles.”