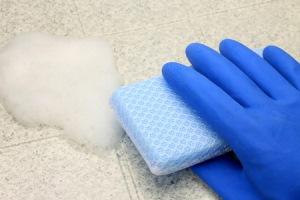 EPA researchers have been looking at ways to help homeowners clean up areas contaminated by low level cesium contamination from a nuclear incident, such as those at the Chernobyl or Fukushima nuclear power plants.

Initially, millions of people were evacuated from their homes following the earthquake and tsunami that affected Japan. This past spring, restrictions in some of Fukushima’s evacuation area were relaxed, allowing residents to move back into their homes and leaving cleanup—including reducing low-level cesium radiation that might be tracked in from the outside—to  the homeowner.

EPA homeland security researchers are conducting studies to assist in just such a situation. According to Agency researcher Emily Snyder, Ph.D, “we are really just trying to develop methods and strategies that would involve easily obtainable and common cleaning materials that anyone living in or returning to areas with low levels of contamination could use to reduce exposure and contamination.”

As part of that effort, Snyder and her colleagues have tested removing cesium contamination from the surfaces of materials commonly found in homes or businesses, comparing the use of water alone to a widely available household cleaning product.  They found that scrubbing and wiping non-porous surfaces such as countertops and floors with either water or a cleaner, Simple Green, were 90% effective for reducing cesium contamination. However, contamination was more difficult to remove from wood, wallboard, and other porous surfaces.

Agency scientists also evaluated washing soft materials at different temperatures, with and without detergent, and through repeat washings to determine the best ways to reduce cesium levels in fabrics (clothing and other washable items such as towels). They examined these strategies on both commonly-used polyester and cotton items.

While laundering does remove the contamination from clothing, an important consideration remains: what about the cesium in laundry wastewater on its way to the local wastewater treatment plant? “This does pose a possible problem for the plant t as we anticipate that cesium would accumulate on its biosolids,” said Snyder. “More research will be needed to know how to handle this challenge in a large scale event.”

These assessments reveal that simple house cleaning activities like scrubbing, wiping and laundering may remove a large amount of contamination from homes and clothing, and that people can reduce their exposure themselves using common household products, so long as measures are taken to avoid unintentional exposures.