EPA chemists and partners are developing standards and methods to support lab analysis of chemical agents. 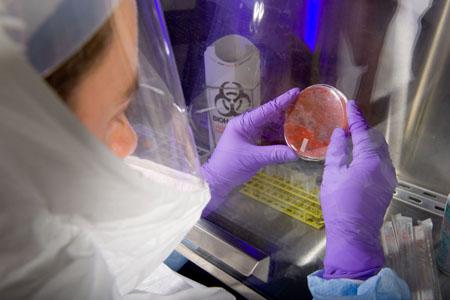 In 1995, members of Aum Shinrikyo launched five coordinated sarin attacks on several lines of the Tokyo metro, killing thirteen people and injuring more than a thousand. This act of domestic terrorism was the first serious attack in Japan since World War II.

If a similar attack using a chemical warfare agent (CWA) occurred in the U.S., there would be an immediate need to identify and quantify the amount of agent released, and to clean up affected sites. Follow up tests would then be needed to determine if residual amounts remained following the clean up.

To prepare for such an attack, and to support response and remediation teams, EPA chemists have been developing methods for detecting extremely low concentrations of nerve agents, such as sarin, VX, soman and cyclohexyl sarin, and the blister agent sulfur mustard.

Chemists need standards—known quantities of these chemicals—to calibrate their instruments before they can measure compounds in question.  However, important international treaties and domestic safeguards designed to make access to these compounds difficult can also hinder the ability of research labs to obtain them. To remove this hurdle and enhance laboratory testing capabilities, EPA homeland security researchers worked with the Agency’s Office of Emergency Management and the U.S. Army and Department of Energy to arrange for the Environmental Response Laboratory Network (ERLN) to obtain and use “ultra-dilute” (10 parts per million) quantities of CWAs. These standard samples are safely and securely stored on site.

The ERLN is a national network of laboratories that can be ramped up as needed to support large scale environmental responses by providing consistent analytical capabilities, capacities, and quality data in a systematic, coordinated response. The network integrates capabilities of existing public sector laboratories with accredited private sector labs to support environmental responses.

EPA researchers and the Lawrence Livermore National Laboratory (LLNL) recently completed several studies to examine the shelf-life of ultra-dilute concentrations of these agents that can be used as standards in the event a large-scale response is needed.   Their study, Stability Study for Ultra-Dilute Chemical Warfare Agent Standards (download at www.epa.gov/nhsrc/) was the first to present standards on the stability and shelf-life of testing solutions.  It provides information that labs can use to calibrate instruments, a critical step in preparing to accurately and reliably analyze CWAs in an emergency.

LLNL and EPA prepare and supply these solutions to the ERLN.  According to Terry Smith, an ERLN research chemist, “The standards have been invaluable in enabling the ERLN to develop the capability to fulfill its Homeland Security mission to support response activities involving CWA contamination.”  The ERLN requires labs to provide confirmatory and quantitative analysis of environmental samples.  This would be impossible without having the high-quality, authentic analytical standards for instrument calibration, Quality Assurance, and proficiency testing that have been provided by EPA’s homeland security researchers.”