Plutonium (chemical symbol Pu) is a silvery-gray, radioactive metal that becomes yellowish when exposed to air. Plutonium is considered a man-made element, although scientists have found trace amounts of naturally occurring plutonium produced under highly unusual geologic circumstances. The most common radioisotopes

isotopeA form of an element that has the same number of protons but a different number of neutrons in the nucleus, giving it a different atomic mass. For example, uranium has thirty-seven different isotopes, including uranium-235 and uranium-238. of plutonium are Pu-238, Pu-239, and Pu-240.

Plutonium levels in the environment are very low and pose little risk.

Most plutonium in the environment is in the form of microscopic particles that are the remnants of nuclear weapons testing and nuclear reactor accidents. The microscopic particles from atmospheric nuclear weapons testing are dispersed widely in the environment. As a result, virtually everyone comes into contact with extremely small amounts of plutonium. 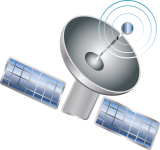 radioactive decayThe process in which an unstable (radioactive) nucleus emits radiation and changes to a more stable isotope or element. process, which makes it useful as a heat source for sensitive electrical components, or as a power source in satellites. Radioisotope thermoelectric generators (RTGs) utilize radioisotopes (such as plutonium-238) to generate power for satellites. Plutonium-239 is used to make nuclear weapons. Plutonium-239 and Pu-240 are byproducts of nuclear reactor operations and nuclear bomb explosions.

Most forms of plutonium emit alpha particles, which are not very harmful outside the body, but can be very damaging when inhaled. When plutonium particles are inhaled, they lodge in the lung tissue. The alpha particles can kill lung cells, which causes scarring of the lungs, leading to further lung disease and cancer. Plutonium can enter the blood stream from the lungs and travel to the kidneys, meaning that the blood and the kidneys will be exposed to alpha particles. Once plutonium circulates through the body, it concentrates in the bones, liver, and spleen, exposing these organs to alpha particles. Plutonium that is ingested from contaminated food or water does not pose a serious threat to humans because the stomach does not absorb plutonium easily, it passes out of the body in the feces.