alpha particleA form of particulate ionizing radiation made up of two neutrons and two protons. Alpha particles pose no direct or external radiation threat; however, they can pose a serious health threat if ingested or inhaled., beta particles

beta particleA form of particulate ionizing radiation made up of small, fast-moving particles. Some beta particles are capable of penetrating the skin and causing damage such as skin burns. Beta-emitters are most hazardous when they are inhaled or swallowed. and/or gamma rays

gamma raysA form of ionizing radiation that is made up of weightless packets of energy called photons. Gamma rays can pass completely through the human body; as they pass through, they can cause damage to tissue and DNA.. Radioactive decay occurs in unbalanced atoms called radionuclides.

When it decays, a radionuclide transforms into a different atom - a decay product. The atoms keep transforming to new decay products until they reach a stable state and are no longer radioactive. The majority of radionuclides only decay once before becoming stable. Those that decay in more than one step are called series radionuclides. The series of decay products created to reach this balance is called the decay chain

decay chainThe series of decays or transformations that radionuclides go through before reaching a stable form. For example, the decay chain that begins with Uranium-238 culminates in Lead-206, after forming intermediates such as Uranium-234, Thorium-230, Radium-226, and Radon-222. Also called the "decay series.".

Every radionuclide has a specific decay rate, which is measured in terms of "half-life

Two decay chains are shown below: 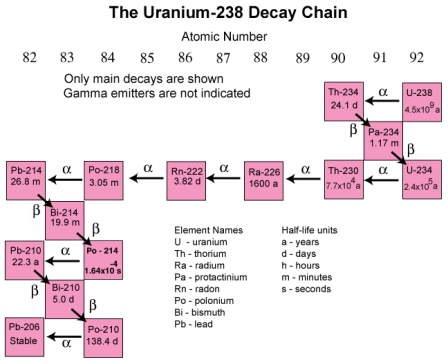 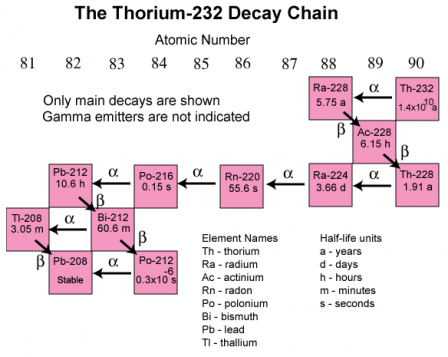