Funded Projects for Improvement of Air Quality at Ports

A total of 71 projects have been entirely awarded to ports totaling $80 million since 2008.  The graphic below shows an overview of funding by year for ports projects through the Diesel Emissions Reduction Act (DERA), and the American Recovery and Reinvestment Act (ARRA). DERA funding includes solicitations through national, state and ports requests for proposals. 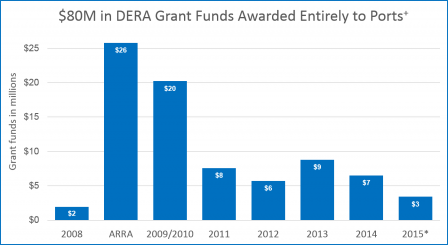