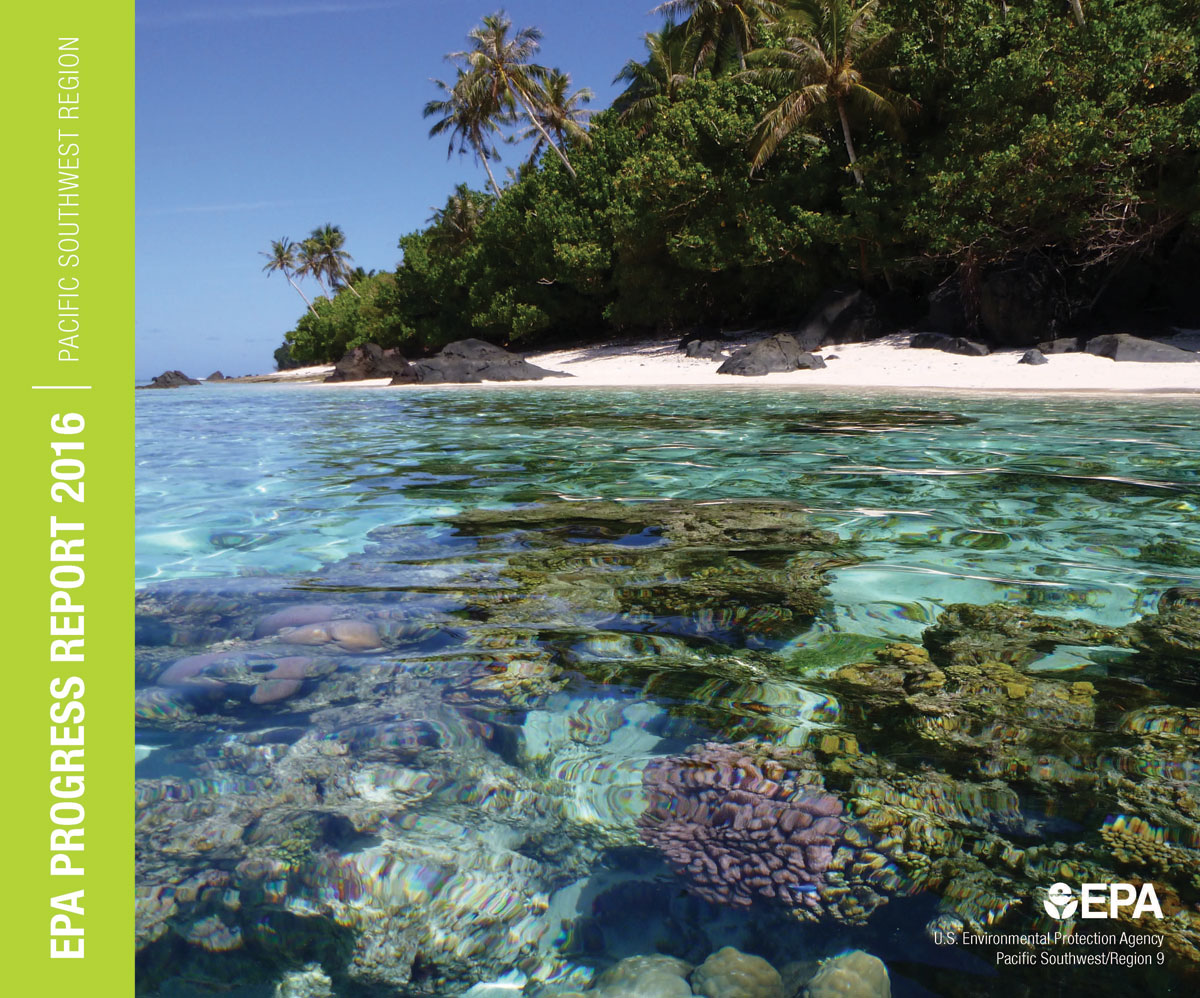 Jacquelyn Menghrajani has been EPA's Children's Health Coordinator in the Pacific Southwest since 2013.

In January 2016, she helped spearhead a two-day symposium in San Diego to discuss children's environmental health risks that are commonly found in communiIes in the U.S.-Mexico border region – such as the Imperial Valley, where parIculate polluIon levels and childhood asthma rates are high.

« Turning the Tide of Trash 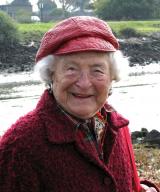 Known as the Bay's "best friend," Sylvia McLaughlin passed away in January 2016 at age 99. She was one of the three founders of the nonprofit Save The Bay that jump-started California's environmental movement. Back in 1961, she and friends Esther Gulick and Kay Kerr decided that "something had to be done" to stop the filling of San Francisco Bay with urban trash and soil.

They recruited tens of thousands of supporters, and by 1965 passed a state law that temporarily stopped the expansion of dozens of landfills then surrounding the bay. Four years later, they passed a permanent ban on bay filling. Work to restore a healthy bay ecosystem is still going strong, including efforts to restore 100,000 acres of the bay's original wetlands.
(Photo courtesy of Save The Bay)

Turning the Tide of Trash

« A Year of Disaster Response 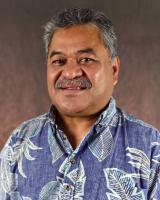 Rabauliman, like many others at BECQ, ignored damage to his own home from the worst storm to hit the island in 30 years to help clear debris and bring back drinking water to the people of Saipan. He and his team worked long hours, even as the government was officially closed.

Rabauliman has served on the cabinet of three governors and brought leadership skills from his career in education to the job of protecting CNMI's environment. He has overseen a reorganization of BECQ that has resulted in resource efficiencies and better protection of coral reefs and near-shore water quality, while also providing development opportunities for staff.

A Year of Disaster Response

Emergency response teams had a busy year, with large-scale cleanups of a coastal oil spill, two major wildfire areas and a typhoon.

EPA works to protect ecosystems and nearby communities from the severe environmental hazards posed by abandoned mines.

Fresh water is especially precious on islands in the Pacific, where EPA is working to prevent pollution from underground tanks and sewage. 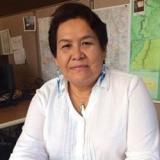 Priscilla Tom is a community involvement coordinator with EPA's Superfund program. She works with communities in eastern Navajo Nation to raise awareness about EPA's work cleaning up abandoned uranium mines and potential public health risks associated with the mines.

Tom joined EPA after working for the Navajo Nation in Window Rock, Arizona. As a member of the Nation herself, she has worked as a community liaison with all 110 Navajo chapters (local governments) on projects such as ensuring emergency preparedness for bio-terrorism incidents and helping chapter leaders file claims for FEMA projects.

Tom is from the small town of Crownpoint, Navajo Nation, N.M., near the famed archeological sites of the Chaco Culture National Historic Park. 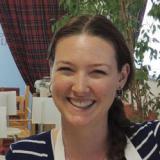 Autumn Roe joined EPA in late 2014 after working as a contract specialist at the U.S. General Services Administration in Honolulu.

In her work as an EPA contracting officer, Roe focuses on the extensive activities to clean up abandoned uranium mines on the Navajo Nation that are funded by a historic legal settlement with Kerr-McGee. As part of the $4.4 billion settlement, EPA received nearly $1 billion to address about 50 abandoned mines.

EPA is taking action to protect people at work and in their homes from hazards that are often unseen.

Nevada communities are benefitting from cleaner air and rapid response to toxic threats. 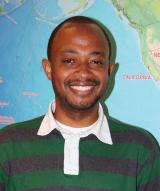 Jelani Shareem joined EPA in 2011 as an intern with the regional Environmental Justice Team. He was the team's communication lead, managing Web content and helping plan a Sustainable Fresno workshop. He also worked in the hazardous waste enforcement group.

Since 2013, Shareem has been an underground injection control (UIC) inspector and enforcement officer – a job on the front line of protecting groundwater supplies from toxic pollutants.

Shareem, who grew up in Oakland, has a bachelor's degree in urban studies from UC Berkeley.

Last summer's Typhoon Soudelor was an example of the increasingly frequent and powerful storms in the tropical Pacific that stem from the rising greenhouse gas emissions worldwide. The typhoon devastated Saipan in CNMI, knocking out the island's power grid by downing hundreds of power poles.

The damage took months to repair. EPA on-scene coordinators collected transformers filled with toxic PCBs from the downed poles, while EPA drinking water experts worked to restore safe water, which was unavailable without power to pump water from wells.

Fortunately, 40 sewage pumping stations continued operating, thanks to EPA grants that had earlier paid for refurbishing them, including the addition of backup generators. This resilient infrastructure prevented sewage from spilling into Saipan's streets. 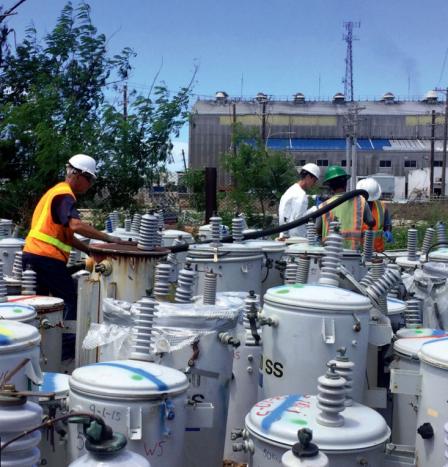 Solid waste management is a particular challenge for islands, where open dumping and litter can contaminate precious land and water resources.

As part of its Zero Waste Plan, Guam has embraced composting green waste and has increased its recycling rate to 33%, up from 18% just a few years ago.

Guam and Saipan (CNMI) have made great progress in cleaning up two former dumps that received all their waste for decades. Saipan's Puerto Rico Dump closed in 2002, and Guam's Ordot Dump closed in 2011, when their trash started going to new, state-of-the art municipal landfills. But that still left two mountains of trash releasing toxic leachate at the old dumps.

Today, Ordot (in photo) has a leachate collection trench around it, robust stormwater controls, and a multi-layer protective cover to keep water out. Construction was completed in March 2016. Similar work began at Saipan's Puerto Rico Dump in 2015 and is expected to finish later this year. 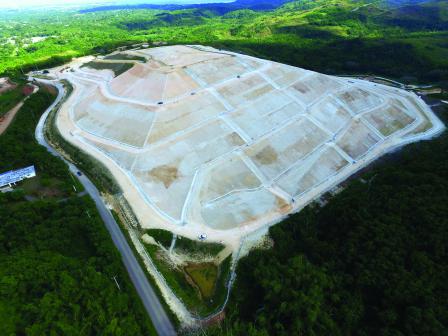 An isolated island group in the South Pacific, American Samoa is vulnerable to the stronger typhoons and sea-level rise associated with global climate change. islands' principal energy source is oil, including and diesel, delivered by tanker ship at a high cost.

Blessed with plenty of sunlight, the territory adopted a goal of fossil-free energy independence. help achieve this, EPA is providing funding and technical assistance for solar energy micro-grid systems.

On American Samoa's remote Manu'a Islands, electricity comes from an old generator fueled by grade diesel that creates so much particulate pollution banned on the U.S. mainland.

An EPA grant is helping retire the old generator build a solar power station with battery storage the lights on at night. 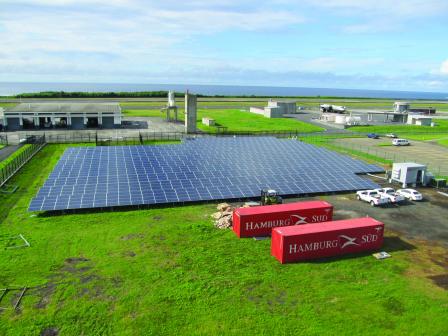 Pacific island ecosystems are extremely vulnerable to the impacts of climate change, particularly sea level rise and ocean acidification, which could stop the growth of coral and shelled organisms. Plastic marine debris breaks down into tiny bits in ocean waters, which are mistaken for food and eaten by birds and fish, poisoning or starving them. 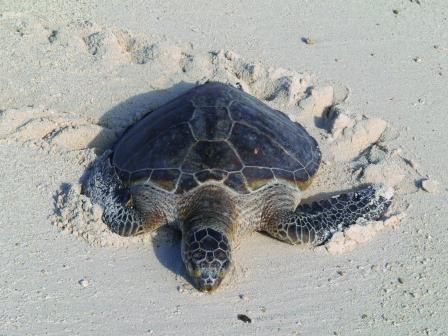 EPA provided $32.4 million in fiscal 2015 to improve environmental protection and public health on island territories in the Pacific – American Samoa, Guam and the Commonwealth of the Northern Mariana Islands.

Since 2010, the islands have received more than $200 million in water and wastewater infrastructure support – more than in the previous 40 years. 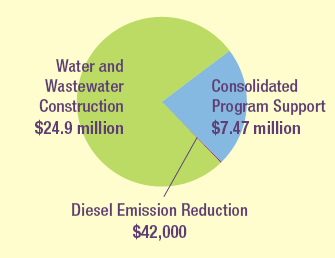 EPA Funding for FY2015 for the Pacific Southwest Region 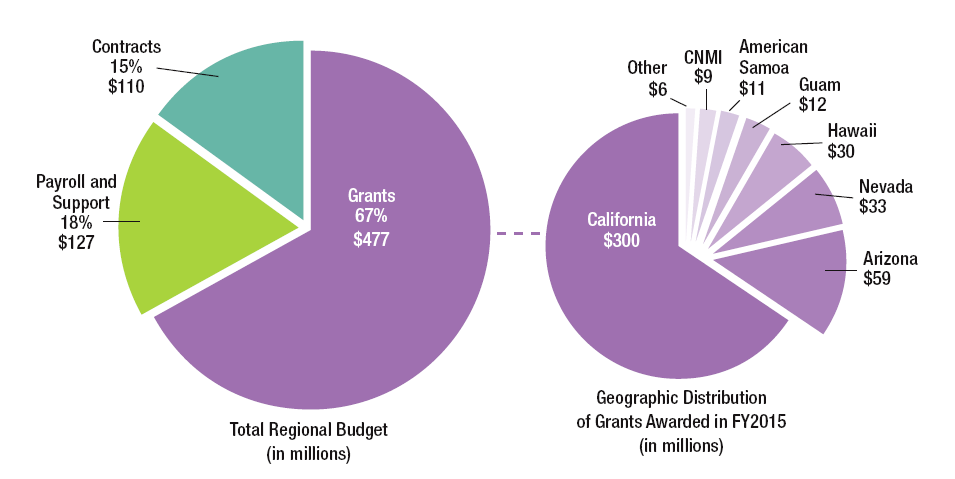 About 82% of the $714 million budget appropriated by Congress for EPA's Pacific Southwest Region flows to state and tribal agencies, local governments, nonprofit organizations and private-sector companies in the form of grants and contracts.

All told, more than half of regional funding is applied toward the goal of Protecting America's Waters. Most of the $369 million in grants awarded under this goal goes to the State Revolving Fund, which supports drinking water and wastewater infrastructure as well as nonpoint source pollution and estuary protection programs. 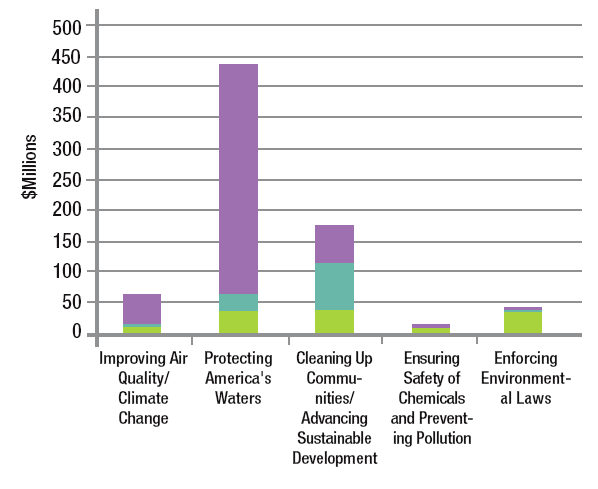 The majority of EPA's grant funding goes to state and tribal agencies for environmental work. (In the Pacific islands, all of EPA's financial support goes to government agencies.) The charts show who receives funding in each of four major geographic areas. 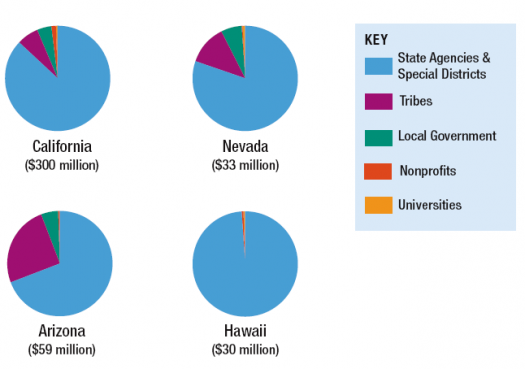 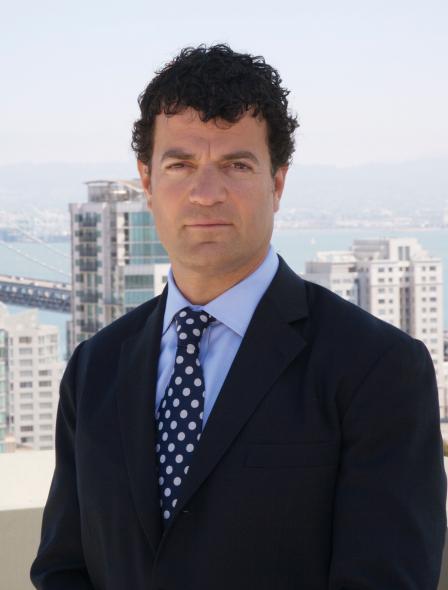 In 1970, EPA was created to protect human health and the environment.  Remarkable gains have been made in those decades – and as new, global challenges have arisen, EPA's role has become more vital than ever.

EPA staff in the Pacific Southwest bring experience, talent and a passion for public service to a range of issues that are increasingly in the public eye – from the Navajo Nation to the far reaches of the Pacific Ocean.

On the islands of the western Pacific, we've used Clean Water and Safe Drinking Water Act funding to upgrade wastewater and drinking water infrastructure, which now provide safe drinking water to 98% of island residents, up from 39% in just over a decade.

In this report, you'll also read about California's statewide efforts to trap trash before it can wash into storm drains – keeping it out of waterways that empty into the Pacific.

Throughout the Pacific Southwest, we work with state, local and tribal governments to reduce the greenhouse gas emissions that contribute to climate change, even as we invest in resilient infrastructure to adapt to its consequences.

From the enforcement authority granted by the Clean Air Act and other statutes to commonsense programs to reduce food waste and encourage clean energy, we have powerful tools to improve the health of our communities and protect the environment that supports all of us.

It's time to roll up our sleeves. We hope the environmental successes in this report will inspire you to join us.