Former Use: Originally opened as the Albuquerque Hilton Hotel in 1939.

Current Use: Hotel Andaluz is a four-star, LEED® Gold Certified hotel, listed on the National Register for Historic Places.

Brownfields are real property, the expansion, redevelopment, or reuse of which may be complicated by the presence or potential presence of a hazardous substance, pollutant or contaminant. Cleaning up and reinvesting in these properties protects the environment, reduces blight, and takes development pressures off greenspaces and working lands.

In 1988, Congress established a process to realign and close surplus military property and return the property for local economic development. The process required the President to establish the Defense Base Closure and Realignment Commission. The Secretary of Defense proposed a list of bases for closure and realignment. The Commission held public hearings and reported its findings to the President. The President had 15 days to approve or disapprove. After approval, the recommendations were sent to Congress, which had 45 days to disapprove or the recommendations became law. There have been five base closure rounds: 1988, 1991, 1993, 1995 and 2005.  The latest round of closures includes one major facility in New Mexico: Fort Wingate Depot Activity.

Fort Wingate Depot Activity (FWDA) is located about eight miles east of Gallup, NM, on the south side of Interstate 40. FWDA closed in January of 1993 after nearly a century and a half of military uses, first as a cavalry post, then as a munitions depot. Approximately one third of the facility's original 21,131 acres are under current reuse by the Missile Defense Agency. Another 5,855 acres have been returned to the Bureau of Land Management, which holds those lands for the future beneficial use of the Navajo and Zuni nations. The remaining lands also are planned to go to tribal use following their cleanup.

Environmental investigation and cleanup efforts, including munitions clearance, have been done since 1994. Major environmental concerns at this site include munitions hazards and groundwater contamination by explosives, nitrates and perchlorate. On December 31, 2005, the New Mexico Environment Department's RCRA permit came into effect, establishing a scheduled cleanup of the facility. Remedial investigations are currently very active. A large cleanup effort at the Open Burn/Open Detonation Area was started in 2013 and continues through 2015.

The Hazardous Waste (RCRA) Corrective Action Program requires investigation and cleanup of releases of hazardous wastes and hazardous constituents that pose an unacceptable risk at RCRA hazardous waste treatment, storage and disposal facilities. Facility evaluations, conducted by EPA or the state, are based on human health and environmental risks posed by actual or potential releases to the environment, potential migration pathways, target receptors and waste characteristics. EPA and the states designate facilities as either high, medium, or low priority.

Ready for Reuse encourages cleanups that will quickly support protective redevelopment opportunities. As part of this program, EPA and/or the states provide a regulatory "determination" that affirms that the conditions on the site are protective of human health and the environment based on the current and planned future use(s) of the property.

View a complete list of Site-Specific Determinations in New Mexico.

Sites in Reuse in New Mexico

Cleanups in my Community 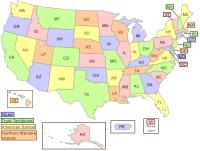 Click the map to search by street address, city, county, and other geographies to find out how EPA's Superfund, RCRA, Brownfields and Emergency Response programs are cleaning up land in communities across the USA.