Established in 1999, the SF6 Emission Reduction Partnership for Electric Power Systems is a collaborative effort between EPA and the electric power industry to identify, recommend, and implement cost-effective solutions to reduce sulfur hexafluoride (SF6) emissions. SF6 is a highly potent greenhouse gas that is used in the industry for insulation and current interruption in electric transmission and distribution equipment.

The most common use for SF6, both domestically and internationally, is as an electrical insulator in high voltage equipment that transmits and distributes electricity. Since the 1950’s, the U.S. electric power industry has used SF6 in circuit breakers, gas-insulated substations and other switchgear used in the transmission system to manage the high voltages carried between generating stations and customer load centers.

Several factors affect SF6 emissions from electric power systems, such as the type and age of the SF6-containing equipment (e.g., old circuit breakers can contain up to 2,000 pounds of SF6, while modern breakers usually contain less than 100 pounds) and the handling and maintenance procedures practiced by electric utilities. Because of its long life span and high global warming potential (GWP), even a relatively small amount of SF6 can impact the climate.

The electric power industry uses roughly 80 percent of all SF6 produced worldwide. Ideally, none of this gas would be emitted into the atmosphere. In reality, significant leaks occur from aging equipment, and gas losses occur during equipment maintenance and servicing. With a GWP 22,800 times greater than carbon dioxide (CO2) and an atmospheric life of 3,200, one pound of SF6 has the same global warming impact of 11 tons of CO2.

The electric power industry can reduce the nation’s SF6 emissions through cost-effective operational improvements and equipment upgrades. Through improvements in the leak rate of new equipment, refurbishing older equipment, and the use of more efficient operation and maintenance techniques, utilities often find economical solutions to reduce SF6 emissions.

Under the partnership, EPA shares information on best management practices and technical issues to help reduce emissions. Some cost-effective options to reduce SF6 emissions are:

Joining the SF6 Emissions Reduction Partnership for Electric Power Systems can save money and provide your organization with recognition from the EPA as a leader in the effort to reduce greenhouse gas emissions. By becoming a partner, you join a group of electric utilities committed to voluntary and cost-effective pollution prevention. After joining the partnership, you will be kept up-to-date on partnership activities and be provided information and assistance to pursue your emissions reduction goals. Voluntary reports submitted under the Partnership to provide SF6 emission estimates for the previous calendar year are due to EPA on March 31st annually.

Becoming a partner is easy:

The table below provides the list of current partners in the SF6 Emissions Reduction Partnership for Electric Power Systems. These electric utilities companies are committed to the voluntary reduction of SF6 emissions through cost-effective operational improvements and equipment upgrades.

Since 1999, members of the U.S. electric power industry and the EPA have been working together to identify and implement opportunities to reduce SF6 emissions. As part of their commitment to the Partnership, Partners annually report their SF6 emissions and nameplate capacity estimates to EPA (Note: Under EPA’s Greenhouse Gas Reporting Program, Partners with a total nameplate capacity exceeding 17,820 pounds must report emissions and nameplate capacity under subpart DD - Use of Electric Transmission and Distribution Equipment.) EPA collects and aggregates Partner information to determine the overall accomplishments of the Partnership. 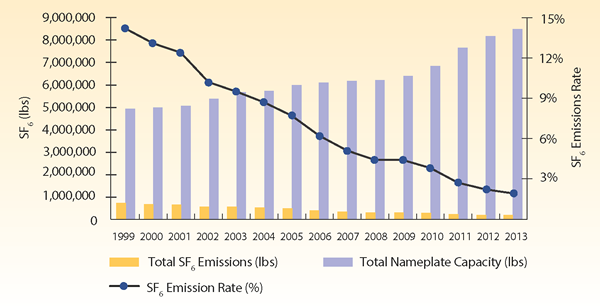 View the 2014 Partnership Report for more information on the accomplishments of the Electric Power Systems Partnership.

The documents and resources below were developed under the partnership to encourage the implementation of cost-effective solutions to reduce SF6 emissions.