About the Columbia River

Canadian Northwest to the ocean so blue, Roll on Columbia, roll on - Woody Guthrie

The Columbia River watershed covers a major portion of North America, including parts of seven states and British Columbia, Canada. It provides drainage for hundreds of rivers, creeks, and streams - covering an area of more than 260,000 square miles. The Columbia River itself flows over 1,200 miles from its source in the Canadian Rockies to the Pacific Ocean. It's the second largest river in the U.S. in volume of water flow, behind only the Mississippi River. 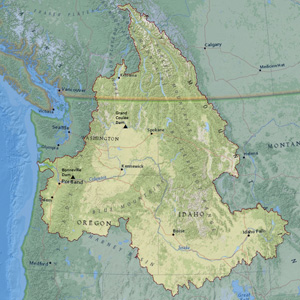 The watershed provides an important backdrop for urban development, agriculture, transportation, recreation, fisheries and hydropower in the western United States. But heavy use has also caused signifiant declines in the salmon population, which were once the largest in the world. The tribal people of the region have depended on these salmon for thousands of years for food, trade, cultural and spiritual use.

EPA and other federal agencies, along with states, tribes, local governments, nonprofit organizations, and individual citizens are all engaged in efforts to restore and improve the quality of the water, land and air within the basin. The sheer size and geography of the watershed requires unprecedented cooperation to accomplish these critical ecosystem restoration efforts.

Learn about key projects throughout the basin: