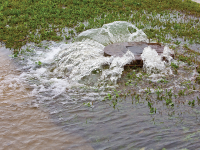 Urban drainage systems capture and treat stormwater runoff and prevent urban flooding. During storm events, the volume of runoff flowing into drainage systems and the ability of these systems to manage runoff depend on a variety of site-specific factors, such as the imperviousness of the land area in the drainage basin. Changes in storm intensity associated with climate change have the potential to overburden drainage systems, which may lead to flood damage, disruptions to local transportation systems, discharges of untreated sewage to waterways, and increased human health risks.19 In areas where precipitation intensity increases significantly, adaptation investments may be necessary to prevent runoff volumes from exceeding system capacity.

Without global GHG mitigation, climate change is projected to result in increased adaptation costs for urban drainage infrastructure, a finding that is consistent with the conclusions of the assessment literature.20 Figure 1 presents the projected costs for the 50 modeled cities in 2050 and 2100 under the Reference scenario using the IGSM-CAM climate model for the three categories of storm events modeled (24-hour events with precipitation intensities occurring every 10, 25, and 50 years).21 The average per-square-mile costs are projected to be highest in the Great Plains region in both 2050 and 2100 due to the projected increase in heavy precipitation in that region. Adaptation costs are estimated to be relatively low in the Southwest due to the projected reduction in precipitation in that region. 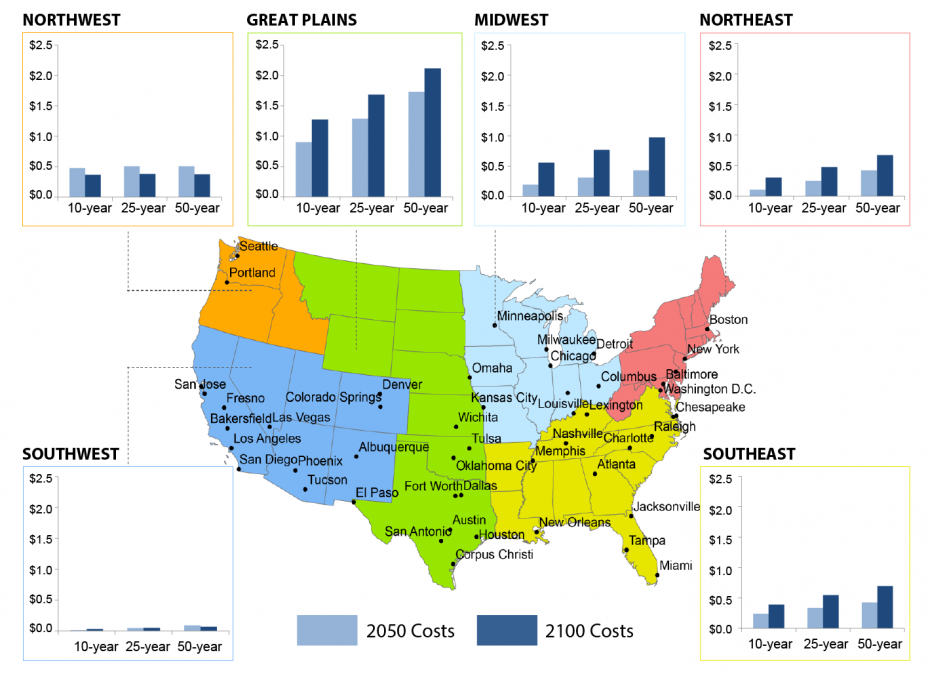 Weighted average per-square-mile adaptation costs (millions 2014$, undiscounted) in 2050 and 2100 for the 10-, 25-, and 50-year storms under the Reference scenario using the IGSM-CAM climate model. Costs for each of the 50 modeled cities (shown) are aggregated to the six regions used in the Third National Climate Assessment.

Global GHG mitigation is projected to result in substantial adaptation cost savings for urban drainage systems in the 50 modeled cities (Figure 2). Overall, cost savings are projected to be higher in 2100 than in 2050, and increase according to the intensity of the storm modeled, with the greatest savings occurring for the 50-year, 24-hour storm. For this particular storm event, total adaptation costs for the modeled cities are projected to be $12 billion in 2100 under the Reference. Under the Mitigation scenario, these costs are reduced to approximately $5.5 billion, which represents a cost savings of approximately $6.4 billion. Cost savings for the 10- and 25-year storms under the Mitigation scenario are approximately $3.9 billion and $5.1 billion, respectively, in 2100. Looking across the contiguous U.S., the Great Plains region is projected to experience the largest reductions in adaptation costs as a result of global GHG mitigation. These results rely upon climate projections from the IGSM-CAM, which projects a relatively wetter future for most of the U.S. compared to the MIROC climate model (see the Levels of Certainty section of this report for more information). Using the drier MIROC model, projected benefits of GHG mitigation for the modeled cities associated with the 50-year, 24-hour storm event are estimated at $50 million.

Figure 2. Projected Impacts on Urban Drainage Systems in 50 U.S. Cities with and without Global GHG Mitigation

The CIRA analysis estimates the costs of adapting urban drainage systems to meet future demands of increased runoff associated with more intense rainfall under climate change. The analysis relies upon climate projections from two climate models: IGSM-CAM, which projects a relatively wetter future for most of the U.S., and the drier MIROC model. Adaptive actions focus on the use of best management practices to limit the quantity of runoff entering stormwater systems. While many site-specific factors influence the effect of climate change on a given drainage system, the CIRA analysis uses a streamlined approach that allows for the assessment of potential impacts in multiple U.S. cities under the CIRA scenarios.22 Specifically, the analysis uses a reduced-form approach for projecting changes in flood depth and the associated costs of flood prevention, based on an approach derived from EPA’s Storm Water Management Model (SWMM).

The simplified approach yields impact estimates in units of average adaptation costs per square mile for a total of 50 cities across the contiguous U.S. (see Figure 1) for three categories of 24-hour storm events (those with precipitation intensities occurring every 10, 25, and 50 years—metrics commonly used in infrastructure planning) and four future time periods (2025, 2050, 2075, and 2100). The analysis assumes that the systems are able to manage runoff associated with historical climate conditions, and estimates the costs of implementing the adaptation measures necessary to manage increased runoff under climate change.