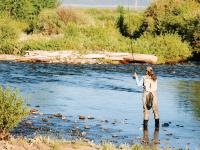 Freshwater fishing is an important recreational activity that contributes significantly to local economies in many parts of the country. Most fish species thrive only in certain ranges of water temperature and stream flow conditions. For example, trout and salmon can only tolerate coldwater streams, while shad and largemouth bass thrive in warmwater habitats (see below infographic). Climate change threatens to disrupt these habitats and affect certain fish populations through higher temperatures and changes in river flow.21

Without GHG mitigation, climate change is projected to have a significant impact on freshwater fishing in the contiguous U.S. Increasing stream temperatures and changes in stream flow are likely to transform many habitats that are currently suitable for coldwater fish into areas that are only suitable for warmwater species that are less recreationally valuable. Under the IGSM-CAM climate projections, coldwater fisheries are estimated to be limited almost exclusively to the mountainous West in 2100, and would almost disappear from Appalachia. In addition, substantial portions of Texas, Oklahoma, Kansas, and Florida would shift from warmwater to rough habitat (Figure 1). Overall, unmitigated climate change is projected to result in a 62% decline in coldwater fish habitat by 2100, which includes approximately 440,000 acres of lost stream habitat. Meanwhile, warmwater and rough stream habitats are projected to increase by 1.3 million and 450,000 acres, respectively. The projected loss of coldwater fish habitat and expansion of warmwater and rough fisheries are consistent with the findings of the assessment literature.22,23 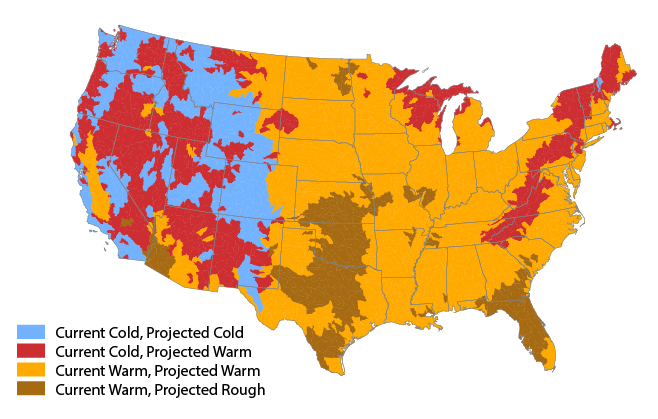 Change in distribution of areas where stream temperature supports different fisheries under the Reference scenario using the IGSM-CAM climate model. Results are presented for the 8-digit hydrologic unit codes (HUCs) of the contiguous U.S. 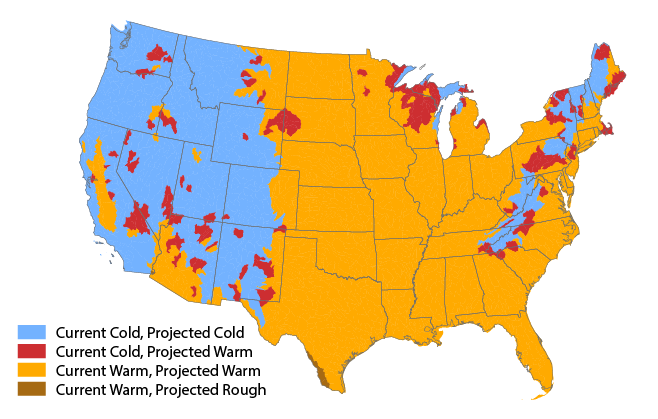 Change in distribution of areas where stream temperature supports different fisheries under the Mitigation scenario using the IGSM-CAM climate mode. Results are presented for the 8-digit HUCs of the contiguous U.S.

Compared to the Reference, the Mitigation scenario provides economic benefits of approximately $1.5 billion through 2100 for coldwater fishing only, and $380 million when all three freshwater fishery types (cold, warm, and rough) are considered (discounted at 3%). These results rely upon climate projections from the IGSM-CAM, which projects a relatively wetter future for most of the U.S. compared to the MIROC climate model. The projected benefits of global GHG mitigation through 2100 are lower with the drier MIROC model (not shown) for coldwater fishing only, at approximately $1.2 billion, but higher when all three fisheries are considered, at approximately $1.5 billion (discounted at 3%).24

The CIRA analysis assesses the impacts of climate change on the distribution of habitat suitable for freshwater fish across the U.S. and estimates the economic implications of these changes. Water temperature changes are simulated for the CIRA emissions scenarios using the IGSM-CAM and MIROC climate models to estimate changes in suitable habitat (in stream acres) for three types of freshwater fisheries: cold, warm, and rough (species tolerant to warmest stream temperatures). Each fishery type represents a categorization of individual species based on their tolerance for different river and stream water temperatures. This analysis does not evaluate impacts to fisheries in lakes and reservoirs, which are vulnerable to climate change in different ways compared to streams and rivers.25 As shown at the bottom of this section, the coldwater fish guild contains species that are the least tolerant to increasing stream temperatures, and are therefore the most vulnerable to climate change.

Results from habitat modeling considering projected changes in both water temperature and streamflow serve as input to an economic model to analyze the impacts of habitat change on the value of recreational fishing. The model estimates fishing behavior as the likelihood that an adult in a particular state is an angler and the likelihood that an angler fishes for species in each fishery type. The fishing value for each fishery type is derived by multiplying the number of fishing days by the value of a fishing trip.26

As the implications of changes to the distribution of freshwater fisheries extend beyond recreational use by humans, this analysis underestimates the economic benefits of GHG mitigation.