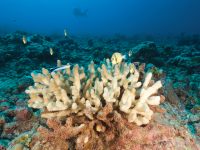 Coral reefs, including those found in Hawaii and the Caribbean, are unique ecosystems that are home to large numbers of marine plant and animal species. They also provide vital fish spawning habitat, protect shorelines, and are valuable for recreation and tourism. However, shallow-water coral reefs are highly vulnerable to climate change.3 High water temperatures can cause coral to expel the symbiotic algae that provide nourishment and vibrant color for their hosts. This coral bleaching can cause the coral to die. In addition, ocean acidification (ocean chemistry changes due to elevated atmospheric CO2) can reduce the availability of certain minerals in seawater that are needed to build and maintain coral skeletons.

Without GHG mitigation, continued warming and ocean acidification will have very significant effects on coral reefs. For major U.S. reefs, projections under the Reference show extensive bleaching and dramatic loss of shallow coral cover occurring by 2050, and near complete loss by 2100. In Hawaii, coral cover is projected to decline from 38% (current coral cover) to approximately 5% by 2050, with further declines thereafter. In Florida and Puerto Rico, where present-day temperatures are already close to bleaching thresholds and where these reefs have historically been affected by non-climate stressors, coral is projected to disappear even faster.4 This drastic decline in coral reef cover, indicating the exceedance of an ecosystem threshold, could have significant ecological and economic consequences at regional levels. These projections of shallow coral loss for major U.S. reefs are consistent with the findings of the assessment literature.5 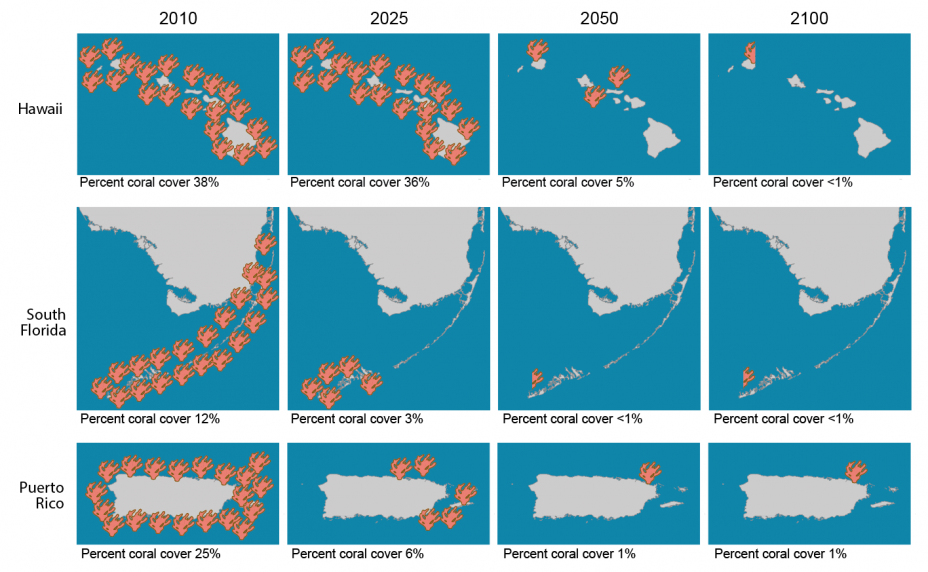 Approximate reduction in coral cover at each location under the Reference scenario relative to the initial percent cover. Coral icons do not represent exact reef locations. Results for 2075 are omitted as there is very little change projected between 2050 and 2100.

The delay in the projected decline of coral results in an estimated $22 billion in economic benefits for recreation across the three sites through 2100 (discounted at 3%). The majority of these recreational benefits are projected for Hawaii, with an average value through 2100 of approximately $20 billion (95% confidence interval of $10-$30 billion). In Florida, where coral reefs have already been heavily affected, recreational benefits are also positive, but notably lower at approximately $1.4 billion (95% confidence interval of $0.74-$2.1 billion). In Puerto Rico, benefits are estimated at $0.38 million (95% confidence interval of $0.20-$0.57 million), but only represent recreational benefits for permanent residents, and therefore are not directly comparable to the other locations where visits from nonresident tourists are also included. Including the economic value of other services provided by coral reefs, such as shoreline protection and fish-rearing habitat, would increase the benefits of mitigation. 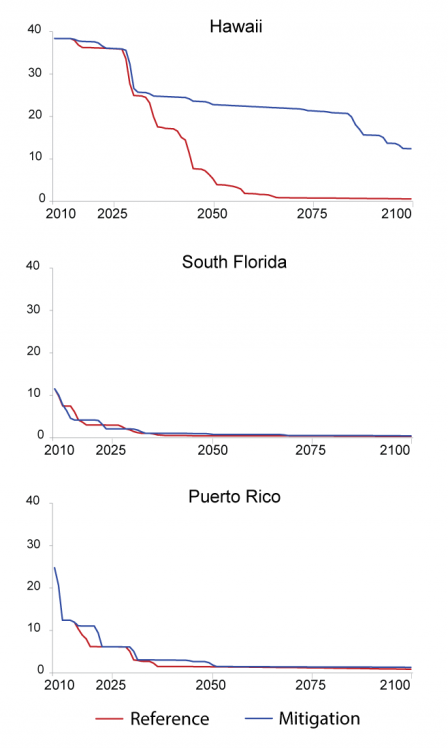 The CIRA analysis examines the physical and economic impacts of climate change and ocean acidification on coral reefs in Hawaii, South Florida, and Puerto Rico. Using the COMBO (Coral Mortality and Bleaching Output) model,6,7 the analysis first estimates declines in coral reef cover (a measure of coral reef health and density) using projections of future ocean temperature (from the IGSM-CAM) and chemistry under the CIRA Reference and Mitigation scenarios.8 The effects of future bleaching events are also estimated.

Next, the analysis quantifies the economic impacts associated with coral reef cover loss based on declines in reef-based recreation. The analysis estimates these impacts using a benefit-transfer approach; that is, it draws on reef-related recreation benefits measured in previously published studies conducted at a range of coral reef sites to estimate the value of reef-related recreation benefits in the areas considered in this study.9 Projected impacts to recreation at each site are provided with confidence intervals based on the 95% interval for per-trip recreational values.