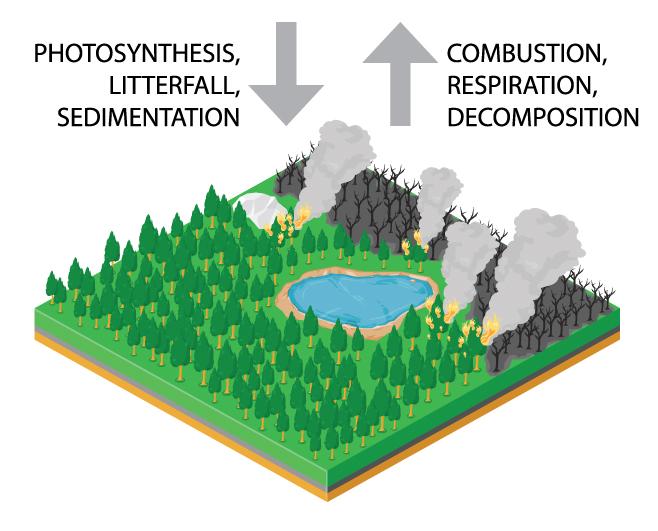 Terrestrial ecosystems influence the climate system through their important role in the global carbon cycle. These ecosystems capture and store carbon from the atmosphere, thereby reducing its climate impact. However, they can also act as a source, releasing carbon through decomposition and wildfires (Figure 1). Terrestrial ecosystems in the U.S., which include forests, grasslands, and shrublands, are currently a net carbon sink. Today, forests store more than 227 million tons of carbon per year, which offsets approximately 16% of all annual U.S. carbon dioxide emissions from fossil fuel burning.47 Forest carbon storage has increased due to net increases in forest area, improved forest management, as well as higher productivity rates and longer growing seasons driven by climate change.48 However, climate-driven changes in the distribution of vegetation types, wildfire, pests, and disease are affecting, and will continue to affect, U.S. terrestrial ecosystem carbon storage.49

Climate change impacts on terrestrial ecosystem carbon storage under the Reference are on the order of billions of tons of carbon from 2000 to 2100, with some regions showing substantial changes in terrestrial carbon stocks (total amount of carbon in the vegetation). Under the IGSM-CAM climate projections, terrestrial ecosystem storage across the contiguous U.S. is projected to increase 3.4% from 2000 to 2100 (equal to 2.9 billion metric tons),50 primarily due to generally warmer, wetter, and CO2-rich future conditions that are favorable to vegetative growth. Much of the national trend is driven by the Rocky Mountains, South, and East regions, which have the largest projected increases in terrestrial ecosystem carbon. However, as shown in Figure 2, there is substantial regional variation, and projections for carbon storage vary greatly depending on the projected future climate. Results using the drier MIROC climate model project net reductions in stored carbon under the Reference in most regions. These results are consistent with the findings of the assessment literature.51

The impacts of GHG mitigation on national terrestrial ecosystem carbon storage are highly dependent upon the projected future climate, with the magnitude and even directionality of impacts varying over time (Figure 3). Across the contiguous U.S., average results across the IGSM-CAM initializations show that GHG mitigation reduces stored carbon compared to the Reference by 0.5 billion metric tons over the course of the century. The economic value of this lost carbon under the Mitigation scenario is an estimated $9.0 billion (discounted at 3%). As shown in Figure 3, carbon stocks under the Mitigation scenario are larger than the Reference in the first half of the century under the IGSM-CAM, but the trend reverses after 2050, as climate conditions under the Reference (generally warmer and wetter) are more favorable for vegetative growth. There is an early savings from the near-term gain in stored carbon of approximately 1.1 billion metric tons, estimated at $170 billion by 2030 (discounted at 3%). However, these initial gains are not large enough to offset projected losses in the second half of the century.

The projected impacts of climate change on vegetative carbon storage and the effects of GHG mitigation are different when using the relatively drier climate projections from the MIROC model (Figure 3). The MIROC results project a consistent increase in carbon storage benefits when comparing the Mitigation scenario to the Reference, with a carbon stock increase of 1.4 billion metric tons by 2100. The economic value of this carbon gain under the Mitigation scenario is an estimated $120 billion (discounted at 3%). Results using IGSM-CAM projections show much more variability over time than the MIROC results, which is primarily a reflection of the climate projection method.52 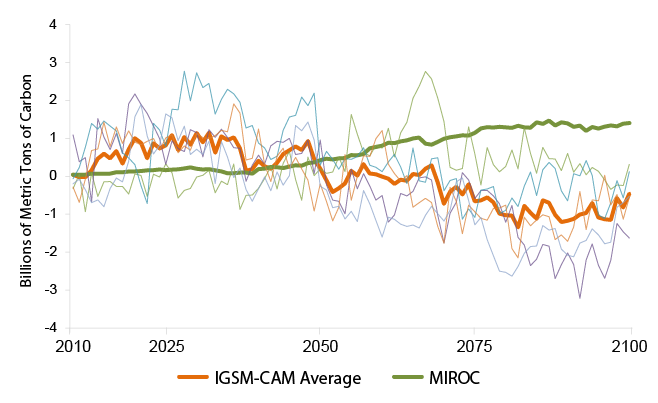 To estimate climate change impacts on terrestrial ecosystem carbon storage, the MC1 dynamic global vegetation model was used to simulate terrestrial vegetative growth and cover (e.g., grasses, shrubs, hard and softwood forests) for the contiguous U.S. from 2000 to 2100.53 Vegetative cover estimates from MC1 reflect simulated changes in climate, biogeography, biogeochemistry, and fire dynamics. MC1 was run using the five initializations of the IGSM-CAM climate model for both the Reference and Mitigation scenarios (see the Methods of Analysis section for more information).54 The results described in this section represent the average of these initializations. Because IGSM-CAM projects a wetter future for a majority of the nation, MC1 was also run using the MIROC climate model. These drier climate projections for the U.S. were used to capture a broader range of possible precipitation futures under the same GHG emissions scenarios.

Projected annual changes in terrestrial carbon storage for non-agricultural, non-developed lands across the contiguous U.S. were summarized by scenario and geographic area, and then monetized using the central estimate of the U.S. Government’s updated social cost of carbon (SCC) values for the years 2010–2050, with extrapolation to 2100.55

This analysis did not consider the effects of future changes in ozone, pests, and disease, which could influence the ability of U.S. terrestrial ecosystems to store carbon.

For more information on the CIRA approach and results for carbon storage, please refer to Mills et al. (2014).56