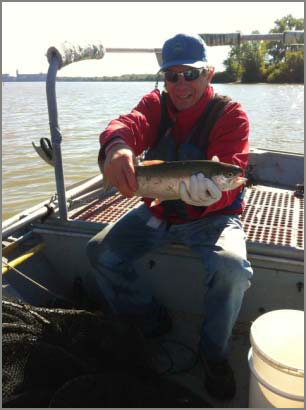 Man on a boat holding a fish

Fish and shellfish are an important part of a healthy diet. They are a lean, low-calorie, high quality source of protein. They contain essential nutrients and omega-3 fatty acids, and are low in saturated fat.

A well-balanced diet that includes a variety of fish and shellfish can contribute to heart health and children's proper growth and development.

However, some fish and shellfish may contain chemicals that could pose health risks. When contaminant levels are unsafe, consumption advisories may recommend that people limit or avoid eating certain species of fish and shellfish caught in certain places.

Some fish and shellfish can also accumulate illness-causing microorganisms like bacteria and viruses that could pose health risks to consumers. These risks are often managed by limiting or preventing the harvesting of shellfish from contaminated waters.

All 50 states and some U.S. territories and tribes have consumption advisories to protect people from potential health risks of eating contaminated fish caught in local waters. EPA encourages states, territories and tribes to also issue safe eating guidelines to let people know what fish they can eat safely and to encourage consumption of fish and shellfish as part of a healthy diet.

Advisories: What Not to Eat?

A consumption advisory is a recommendation to limit or avoid eating certain species of fish or shellfish caught from specific water bodies or types of water bodies (e.g., lakes, rivers or coastal waters) due to chemical contamination.

Advisories may be issued for the general public or for specific groups of people at risk, such as:

An advisory about fish from a specific waterbody or type of waterbody may address more than one affected fish species or chemical contaminant.

EPA maintains a national database of fish and shellfish advisories issued by states.

Guidelines: What is Safe to Eat? 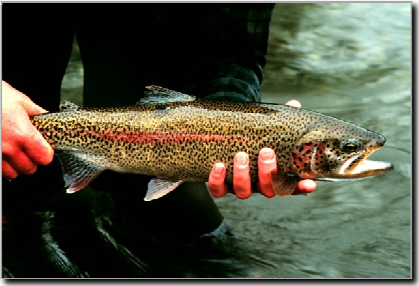 A fish being held in two hands

Because fish and shellfish are such an important part of a healthy diet, EPA encourages states to issue safe eating guidelines to let people know what species are safe to eat. Safe eating guidelines let the public know when there are no limits on eating specific fish species.

These guidelines are developed based on data from fish that have been tested for chemical contamination and are found to be safe to eat. Like fish consumption advisories safe eating guidelines are issued for specific fish species from specific water bodies or types of water bodies by state and local agencies.

Contaminants: What is of Concern?

Most advisories are based on contamination from five toxins that persist for long periods of time in sediments at the bottom of certain water bodies:

Nearly all fish and shellfish contain traces of mercury, no matter what body of water they come from. The risk from consuming mercury by eating fish and shellfish may include harm to an unborn baby or a young child's developing nervous system if the mercury levels are high enough.

When developing the “Advice About Eating Fish”, EPA and the Food and Drug Administration (FDA) concluded that the following types of people should eat more fish that is lower in mercury for important developmental and health benefits:

The advice includes a chart showing how often to eat more than 60 types of fish and shellfish and supplemental questions and answers.

Bacteria, Viruses and Pollutants in Shellfish

By working collaboratively with state and federal agencies, the shellfish industry and the academic community, these organizations ensure the sanitary control of shellfish produced and sold for human consumption.

Harmful Algal Blooms (HABs) are the proliferation of toxic nuisance algae that harm natural resources and humans, including people getting sick or dying from eating contaminated seafood. Currently 85 toxic microalgal species have been documented. For more information on HABs, please see nutrient pollution.

EPA's ACT: Stay Healthy by Eating Wisely provides more information for those who want to safely include fish and shellfish in their diets.