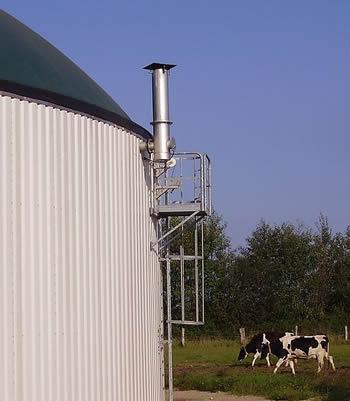 Biogas is created when animal waste, or manure, decomposes. Capturing biogas from cattle, hog and poultry farms can reduce greenhouse gas emissions and recovering the methane from the biogas can provide a cost-effective source of renewable energy. Recovered biogas can be an energy source for electricity, heating or transportation fuel.

How does anaerobic digestion work?

Anaerobic digestion is a process through which bacteria break down organic matter—such as manure—without oxygen. As the bacteria “work,” they generate biogas. The biogas that is generated is made mostly of methane, the primary component of natural gas. The non-methane components of the biogas are removed so the methane can be used as an energy source.

Codigestion occurs when anaerobic digestion is used to break down multiple types of organic waste in one anaerobic digester. Organic wastes that can be used in codigestion with manure include restaurant or cafeteria food wastes; food processing wastes or byproducts; fats, oil and grease from restaurant grease traps; energy crops; and crop residues. Codigestion can increase biogas production from low-yielding or difficult-to-digest organic waste. 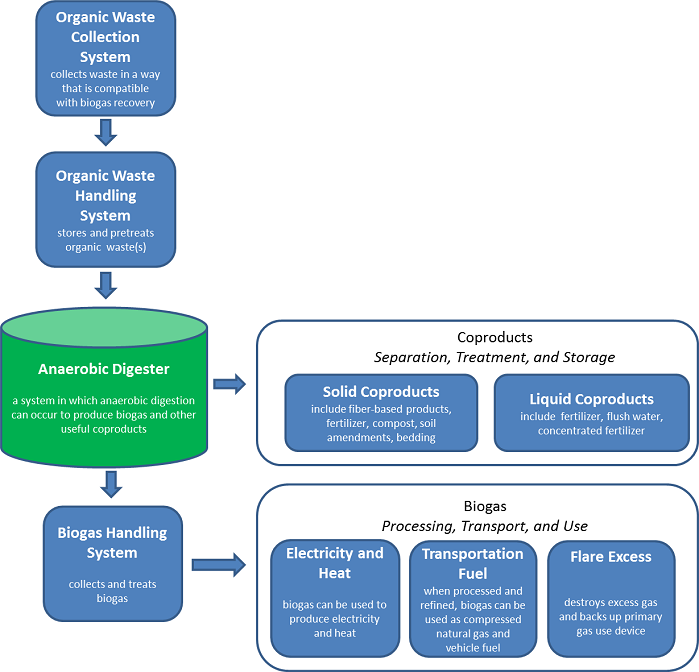 Biogas production is best suited for farms that collect manure:

Other materials such as feed additives with antibiotics and equipment cleaning and maintenance compounds (e.g., detergents, acids and halogens, etc.) may be harmful to anaerobic bacterial action. The typical use of these materials has not been a problem in full scale digesters. However, threshold levels for these compounds have not been established, so operators should be careful not to release large quantities of these materials into manure before it is fed to the digester. 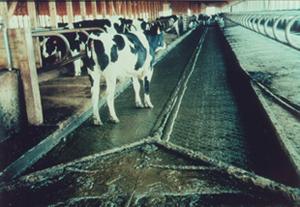 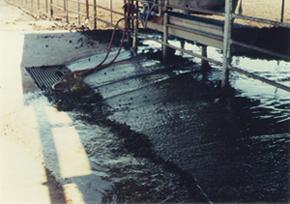 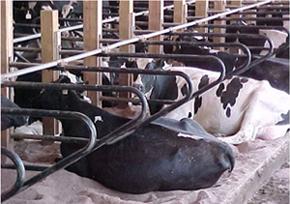 Manure may be pre-treated before entering a digester to adjust the total solids content. This may include adding water, separating solids, mixing or heating.

In a covered anaerobic lagoon design, methane is recovered and piped to the combustion device from a lagoon with a flexible cover. Some systems use a single cell for combined digestion and storage.

Photo of a covered anaerobic lagoon

Plug flow digesters are primarily used at dairy operations that collect manure by scraping. Mixed plug flow systems have been used at a wider variety of operations because they can tolerate a broader range of solids concentrations. 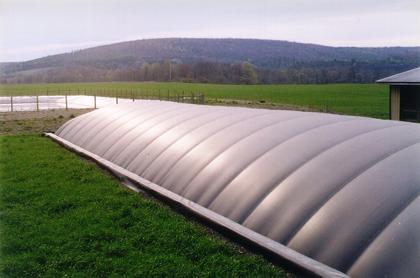 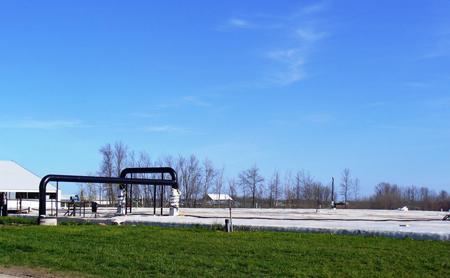 Diagram of a complete mix digester illustrating the process of adding manure into the digester; mixing, heating and storing the biogas within the digester; and extracting the resulting effluent 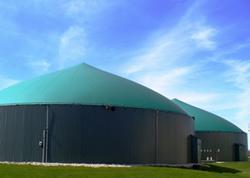 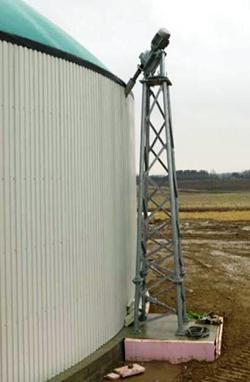 Photo of an externally mounted mixer

Other common designs for anaerobic digesters include:

Digested solids can be removed from the digester effluent with a solids separator. Solids are commonly used as livestock bedding, but can also be sold for use in landscape products, such as soil amendments or biodegradable planting pots. Emerging applications for effluent solids include use in structural building materials, such as deck boards and particle board. 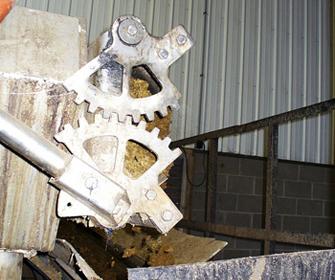 Photo of a screw press separator 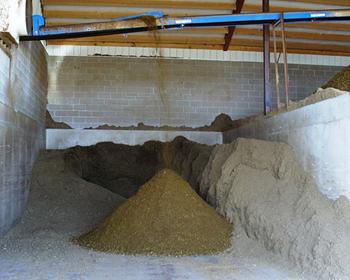 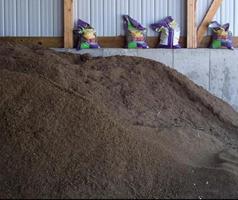 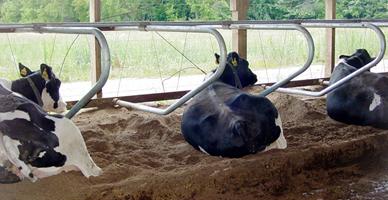 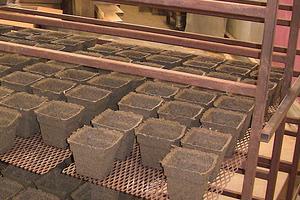 Photo of planting pots made from digested solids

The liquid effluent from a digester can be used as a fertilizer, reducing the purchase of commercial fertilizers. 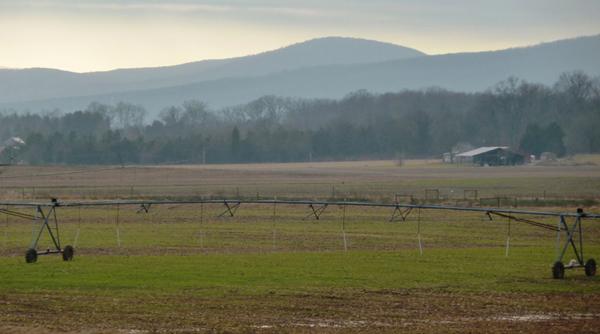 Photo of a crop irrigation system 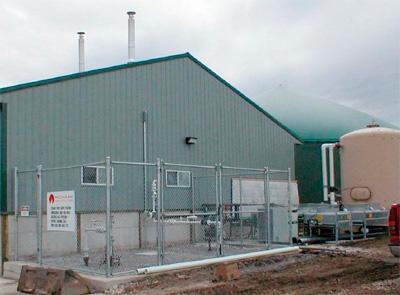 Photo of a biogas treatment system for a pipeline gas project

Captured biogas is transported through a pipe from the digester, directly to a gas use device or to a gas treatment system. In most cases, the only treatment needed is to remove excess moisture prior to combustion. However, if the feedstock contains high concentrations of sulfur, then hydrogen sulfide is removed from the gas to prevent corrosion of the combustion device.

Biogas: Processing, Transport, and Use

While a variety of biogas use options are available, the collected biogas is most often used to generate electricity. 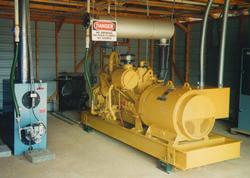 Thermal energy in the form of waste heat, produced during electricity generation, can be recovered to heat digesters or adjacent buildings. 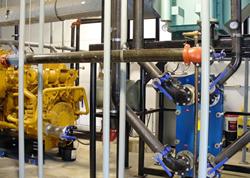 Photo of a heat exchanger that works in conjunction with an engine-generator set to recover heat for space and water heating, thus reducing fuel oil or propane costs.

Biogas can be fired directly in boilers or heaters as a replacement for propane. 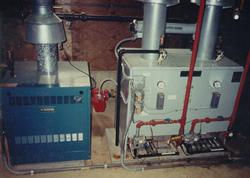 Photo of biogas boiler. Biogas can be fired directly in boilers or heaters as a replacement for propane

Biogas can be processed to pipeline quality and sold to the local gas utility. 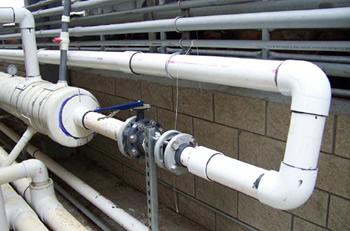 Photo of a biogas pipeline

Biogas can be converted to compressed natural gas (CNG) which can be used in applications such as vehicle fuel. 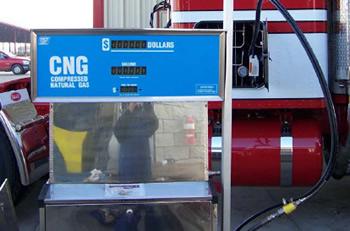 Photo of a truck fueling with compressed natural gas

Flares are used to combust excess biogas or to combust biogas during periods when the primary gas use device is undergoing maintenance or repair. In cases where the primary purpose of the digester is to control odor or generate carbon credits, all of the biogas may be flared. 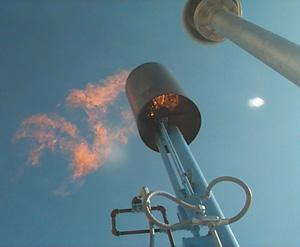 Photo of a biogas flare and flame. 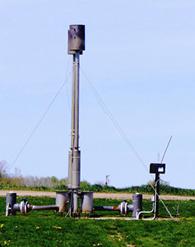 Photo of a biogas flare

Learn more from the following resources: 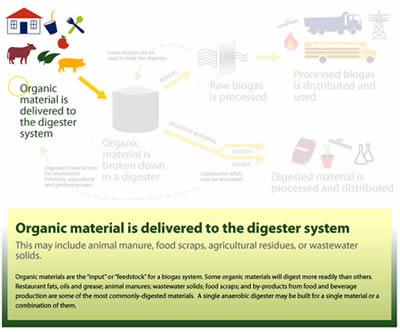 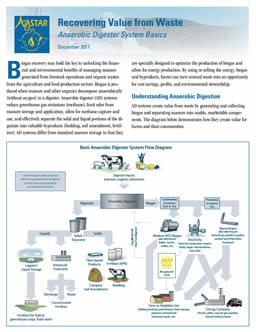