Despite their environmental and economic importance, coastal wetlands (wetlands located in coastal watersheds) in the eastern United States are being lost at twice the rate they are being restored. More focused protection strategies are required to reverse this trend.

What are "coastal wetlands?" 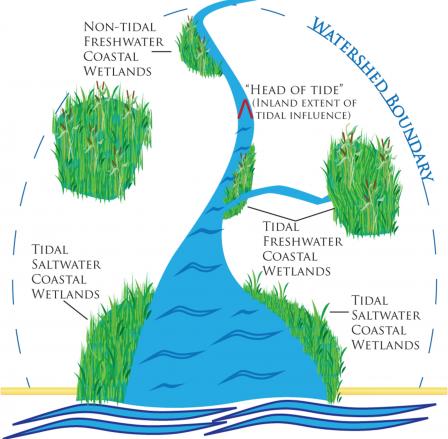 The diagram to the right illustrates the range of wetlands which can be found in a coastal watershed. These wetlands can be tidal or non-tidal, and freshwater or saltwater. 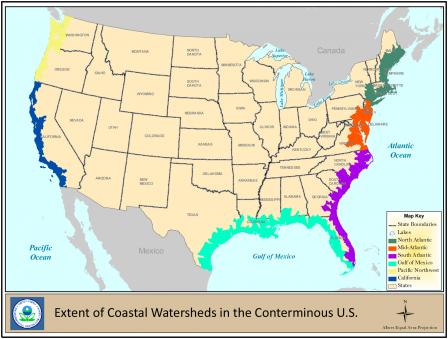 As seen on the map (left), coastal watersheds can extend many miles inland from the coast. The extent and condition of wetlands within a coastal watershed is both dependent on and influences the health of the surrounding watershed. Wetlands in coastal watersheds are experiencing disproportionate losses compared to wetlands in the rest of the country, making them particularly important areas for protection.

More information about wetlands can be found on the EPA Wetlands page.

Why are coastal wetlands important?

Coastal habitats provide ecosystem services essential to people and the environment. These services are valued at billions of dollars.1

Services provided by coastal wetlands include: 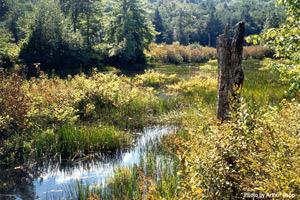 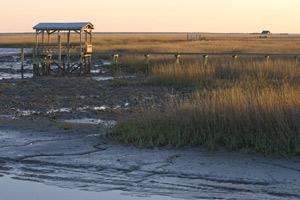 What is the rate of coastal wetland loss?

In the coastal watersheds of the Atlantic, Pacific, the Gulf of Mexico and the Great Lakes, wetlands were lost at an average rate of about 80,000 acres per year between 2004 and 2009.

Coastal wetland acreage trends are documented in the Status and Trends of Wetlands in the Coastal Watersheds of the Conterminous United States (PDF)(58 pp, 12 MB, About PDF) report by the U.S. Fish & Wildlife Service (FWS) and the National Oceanic and Atmospheric Administration's National Marine Fisheries Service. This analysis concluded that more than 80,000 acres of coastal wetlands are being lost on average each year, up from about 59,000 acres lost per year in the previous study covering 1998 to 2004. A majority of this loss occurred in freshwater wetlands.

Why are coastal wetlands being lost?

Coastal wetland losses occur as a result of both human activity and natural processes.

Human Activity: Human activities which may lead to losses of coastal wetlands include urban and rural development, agriculture, and silviculture. These land use changes can also indirectly impact nearby wetlands by altering hydrology through increased runoff or water withdrawals in the watershed. Most of this loss occurs in freshwater wetlands. Over half of the U.S. population lives in coastal counties, intensifying the stress on coastal wetlands relative to inland areas.7

Natural Processes: Coastal wetlands, especially estuarine and marine wetlands, are naturally altered by high energy events such as erosion and inundation from sea level rise and storms. The impacts of these processes may be magnified by climate change and shoreline armoring. Estuarine wetlands typically protect the coastline from erosion and flooding, but if sea level increases and development prevents inland migration of wetlands, more wetlands will be converted to open water. 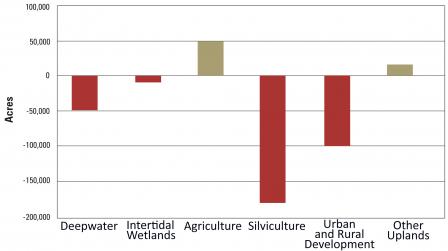 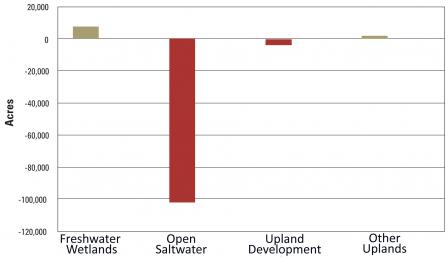 Wetland losses and gains and the resulting changes in land cover between 2004 and 2009 in freshwater (top) and saltwater (bottom) wetlands. Loss or conversion occurred in 265,723 acres of freshwater wetlands and 94,999 acres of saltwater wetlands. Based on information from Status & Trends of Wetlands in the Coastal Watersheds of the Conterminous United States 2004 to 2009.

We can make decisions in our everyday lives which help preserve coastal wetland area and maintain their ecological integrity. 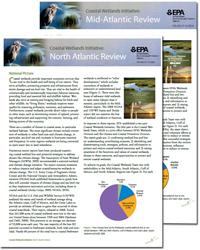 The Coastal Wetlands Initiative was established by the EPA in response to the loss of coastal wetland acreage identified through the U.S. Fish & Wildlife Service's and National Oceanic and Atmospheric Administration - National Marine Fisheries Service's Status & Trends of Wetlands in the Coastal Watersheds of the Eastern United States (PDF) (36 pp, 8.7 MB) . Coastal wetlands in the eastern United States were lost at an average rate of 59,000 acres per year between 1998 and 2004, even while inland wetlands acreage across the United States was increasing. The initiative addresses the need to enhance conservation of coastal wetlands.

The ultimate goal of the Coastal Wetlands Initiative is to reduce and reverse the trend of coastal wetland loss. The immediate goals of the initiative are:

Coastal Wetland Reviews The Interagency Coastal Wetlands Workgroup organized seven Coastal Wetland Review (CWR) meetings with stakeholders in coastal watersheds throughout the Mid-Atlantic, South Atlantic, North Atlantic, and Gulf of Mexico regions1 to collect information regarding stressors on coastal wetlands, local protection strategies and key gaps that, if addressed, could help reverse the trend of wetland loss. The purpose of the CWRs is to facilitate dialogue among stakeholders who share a vested interest in coastal wetland and resource protection and identify ways local, regional and national efforts to stem coastal wetland losses can be made increasingly effective.

The information contained in the four CWR reports is based on existing data in combination with the informed opinions and observations of meeting participants. This information should not be considered a perfect nor comprehensive presentation of issues within the region or within specific focal watersheds. Instead, it should be considered a baseline reconnaissance to build upon as EPA and its partners continue efforts to better protect coastal wetlands.

The Managing Stressors page summarizes the findings from these review meetings. 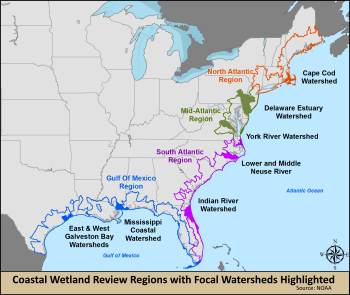 1 Due to limited resources, the West coast could not be included in this study.

Management tools and strategies identified through the Coastal Wetlands Initiative can be found here, to be used by resource managers and other stakeholders.

This site compiles the management tools and strategies highlighted by the Coastal Wetland Review participants, and identifies additional resources which can be used to address stressors of concern. While each region has its own characteristic array of coastal wetland stressors, many management strategies can be transferred to areas experiencing similar issues. These tools and strategies address coastal wetland loss due to stressors such as agriculture, climate change, development, hydrologic modifications, invasive species and silviculture. 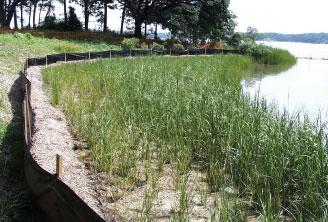 The following are a sample of toolkits designed to deal with various issues relevant to coastal wetlands. Protection strategies for individual wetland stressors identified in the Coastal Wetland Reviews can be found under Managing Stressors. 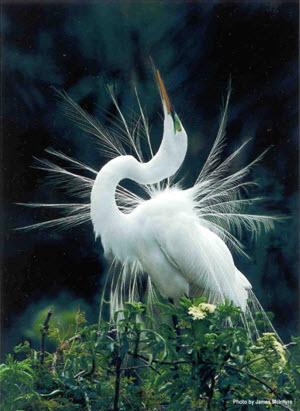 U. S. Army Corps of Engineers: