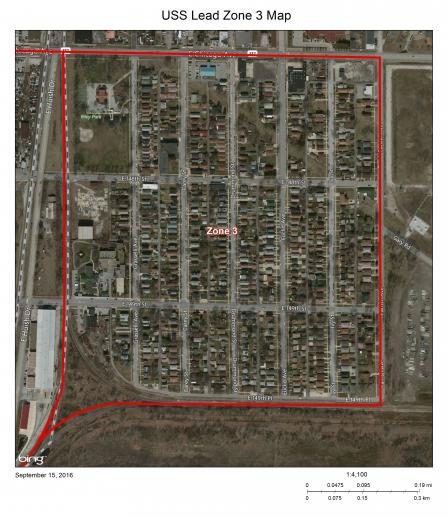 The Calumet neighborhood, or Zone 3 of the site, contains 468 properties. EPA received access agreements and sampled soil at 418 of the Zone 3 properties. After sampling, EPA notified the property owners of their results. If your property was sampled and you have not received your results, contact EPA project managers Tim Drexler or Tom Alcamo (see box, Page 1). Soil in some of the sampled Zone 3 properties contains high levels of lead and arsenic. In October, EPA workers began cleanup of the 38 most contaminated Zone 3 properties under an agreement with the potentially responsible parties. Completion of that work is planned by mid-December. About 200 additional properties will be cleaned in the spring.

Before the 2017 work begins, EPA officials will meet with each property owner to discuss cleanup details. In general, workers will dig up and remove contaminated soil about 2-feet deep and replace it with clean soil, including 6 inches of topsoil. Then they will put sod on the clean soil, restoring each yard to its original condition. All work will be done at no cost to the homeowner. Contaminated soil will be transported to a licensed landfill for proper disposal.

EPA also conducted indoor dust sampling, primarily at the properties identified with the most contaminated soil. Some of the sampled homes had lead and arsenic levels above safe levels. EPA began cleaning these homes in November to remove contaminated dust. EPA officials will continue to offer the same service to other Zone 3 homes that have tainted dust.

Zone 3: a neighborhood located between the Elgin, Joliet & Eastern Railway Line on the west, Parrish Avenue on the east, East 149th Place to the south and E. Chicago Avenue to the north.

Information for Residents in Zone 3

EPA community involvement coordinators have gone door-to-door warning residents not to allow children to play in dirt and providing information on ways to reduce exposure to possible lead in soil. Exposure to high levels of lead in soil can cause various health problems, especially in young children.

To ensure the health and safety of children, the federal Agency for Toxic Substances and Disease Registry, or ATSDR, advises parents to prevent children from playing in dirt or mulch, to wash their children’s toys regularly and to wash children’s hands after they play outside. All residents should remove shoes before walking into their homes.