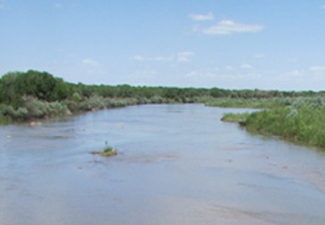 The Middle Rio Grande/Albuquerque Urban Waters Federal Partnership is co-chaired by the U.S. Dept. of Housing and Urban Development and the U.S. Environmental Protection Agency. There are also a number of other federal agencies engaged in projects with Tribal, State and local officials and community stakeholders.

Like many western river ecosystems, the Middle Rio Grande faces numerous challenges balancing competing needs within a finite water supply and resource constrains. Historical practices by tribes and immigrants to the Middle Rio Grande established the conditions residents have inherited. Exacerbated by climate change, long-term drought is changing conditions that affect natural and human communities as we strive to improve our precious Rio Grande.

The Middle Rio Grande/Albuquerque Urban Waters Federal Partnership will reconnect our urban communities, particularly overburdened or economically distressed communities, with the waterway. The partnership will do this by improving coordination among federal agencies and collaborating with community-led revitalization efforts.

Subdivisions of the State