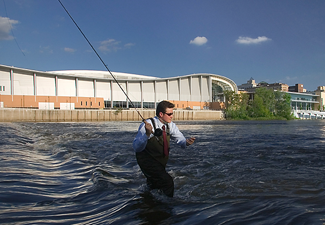 The Grand River Urban Waters Federal Partnership is a business and community-led effort to restore the urban stretch of the Grand River through downtown Grand Rapids, beginning with recreating the namesake rapids. The Grand River is the longest river in Michigan and a tributary to Lake Michigan.

The ability for fish and other creatures to thrive has been significantly impacted by the installation of five low head dams, floodwalls, urban encroachment, dredging, and grading. The five low head dams on the River drown the historic boulder rapids, limit fish passage and prohibit safe recreational uses of the River.

Investments in pollution control in the urban area have already improved water quality and now the community is working for expanded public use and river-oriented economic development.