“Water is the great equalizer –if you’re someone with some kind of limitation, when you’re out on the water you’re the same height, eye-level as everyone else around you.” This was the resonating statement made at the ribbon cutting ceremony for Indiana’s first handicap accessible canoe and kayak launch in Michigan City’s Hansen Park on October 3, 2015. Michigan City Parks and Recreation Department will now host paddlers of all abilities on a wilder portion of Trail Creek most never knew existed before the launch opened.

One woman at the ceremony volunteered to cut the ribbon, which had been strung across the entire width of the creek. Giant scissors in hand, she went from her wheelchair and into a tandem kayak with the president of the Northwest Indiana Paddling Association (NWIPA).  After the ceremonial snip, she reflected that getting in a kayak was something she’d never even dreamed of doing, but that day she thought “yes! I can do that.” 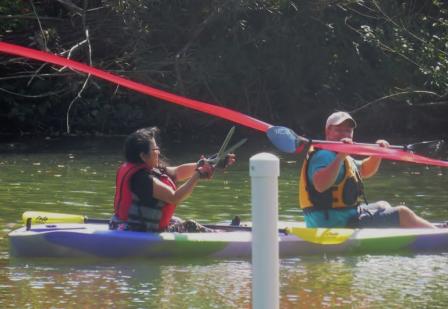 Reaching out to cut the ribbon and open the first accessible boat launch in Indiana -- photo by Dan Plath, President of the Northwest Indiana Paddling Association.

Two of the organizing groups, Team River Runners and NWIPA, plan to use the launch give disabled veterans access to nature. The objective for this programming, and the accessible launch overall, is to allow people easier access to nearby nature and the healing power of water. Other organizations such as those involved in the Trail Creek Watershed Partnership, see the launch as an opportunity to connect residents and visitors to Trail Creek and promote the waterway’s health.

With support from the National Oceanic and Atmospheric Administration and the Indiana Department of Natural Resources' Lake Michigan Coastal Program, partners such as NWIPA, Michigan City Parks and Recreation Department, and many others engaged through the Urban Waters Federal Partnership and Trail Creek Watershed Partnership, and worked nearly three years to make this project a reality. Yet, as Natalie Johnson, Urban Waters Ambassador for Northwest Indiana, remarked: “Once the idea was born, there was no stopping it.”

“I’m excited about it because talk about the power of partnership -- the first launch of its kind in the state.”