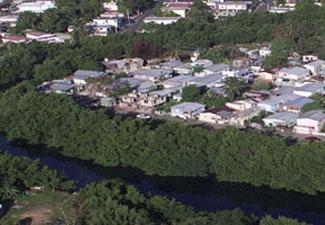 * Congratulations to the Caño Martín Peña Land Trust, a member of this Urban Waters Partnership, on recieving the 2015 United Nations World Habitat Award! *

Read more about the Land Trust and their award here. Exit

During the early 20th century, substandard dwellings were built in the mangrove wetlands bordering the channel, which used refuse and debris as fill material. The channel is clogged with debris, sediment, and organic waste. Over 3,000 structures still discharge raw sewage into the remains of the channel. The lack of adequate sewer and storm water systems has led to flooding, exposing 27,000 residents to polluted waters and sediments.

The Martín Peña Channel Urban Waters Federal Partnership seeks to make significant contributions to the health and welfare of the eight communities that surround the Martín Peña Channel in San Juan. In an effort to improve water quality, restore the watershed’s ecosystem, and address public safety issues, the Federal Partnership is currently engaged in several initiatives with their local partner, the Corporación del Proyecto ENLACE del Caño Martín Peña (ENLACE). This includes an ecosystem restoration project, which involves a major dredging plan to restore water flow in the channel.

Partners have conducted health studies that assess the effects of repeated exposure to contaminated waters and sediments on the public health of the residents, and the public health benefits of dredging Martin Peña. The objective is to transform the environmental and health challenges faced into an invaluable economic, environmental, and recreational asset for the communities and Puerto Rico.