EPA Region 1 is committed to helping tribes strengthen their abilities to manage environmental programs in Indian country, and to ensure that tribes have a voice in decisions that affect their land, air and water. The Region serves 10 federally recognized tribes within the New England states of Maine, Massachusetts, Connecticut and Rhode Island.

GAP is guided by the Guidance on the Award and Management of General Assistance Agreements for Tribes and Intertribal Consortia.
For region-specific information, contact the Region 1 GAP Program Lead:
Stacey Pridgeon-Johnson (johnson.stacey@epa.gov)
(617) 918-1552.

Under the EPA Policy on Consultation and Coordination with Indian Tribes, EPA consults on a government‐to‐government basis with federally recognized tribes. For more specific guidelines on consultation with tribes in Region 1, see the regional procedures below. 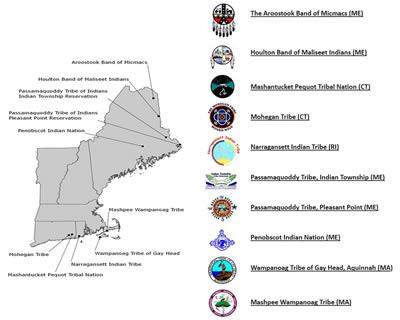 Indian Lands in US EPA Region 1