Marine debris is often the result of poorly managed waste. The amount of waste from U.S. consumers continues to rise, more than doubling between 1960 and 2013. When consumer goods, often single-use disposables, are littered or improperly managed, this trash can find its way into rivers, streams and other waterways. These ultimately empty into our oceans, where the trash becomes marine debris. 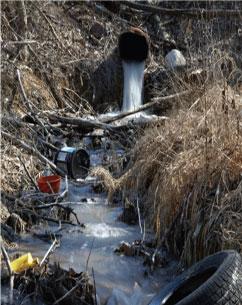 Waterbodies carrying trash often empty into our oceans.
Trash, packaging, and improperly disposed waste from sources on land accounts for 80% of the marine debris found on beaches during cleanups and surveys.

Furthermore, one-third to two-thirds of the debris we catalog on beaches comes from single-use, disposable plastic packaging from food and beverage-related goods and services (things like plastic cups, bottles, straws, utensils, and stirrers). The other 20% (one-fifth) of items making up marine debris are attributed to at-sea losses from accidental or deliberate discharges from ocean-going vessels, and from lost or abandoned fishing gear and traps. 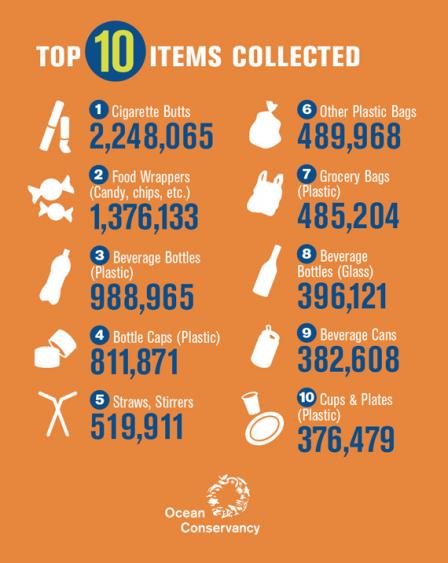 Courtesy of Ocean Conservancy. For more information on Coastal Clean up day, click here. ExitAnalysis of plastic debris in the environment from beach-cleaning surveys typically provides data that is limited to overall trends and larger items. To gain an accurate and meaningful assessment of plastics and their influence, large-scale and long-term monitoring is needed across countries and environments, including the sea floor, and across a range of debris sizes.

The focus of EPA's Trash-Free Waters program is on reducing the land-based types of products and packaging (primarily single-use disposables) that end up as marine debris. Through source reduction, we can greatly reduce the amount of trash getting into waterways, and marine debris.