The transport mechanisms of trash aquatic trash that becomes marine debris can be divided into two categories: 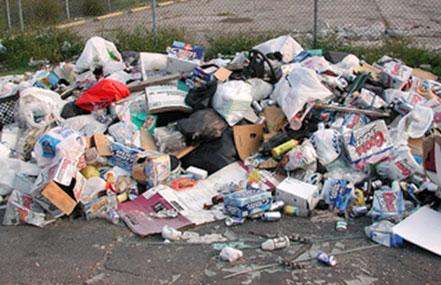 Trash, packaging, and waste improperly disposed on land is washing into rivers, streams, lakes and creeks, and from there to the ocean. This is estimated to account for 80% of the marine debris in the oceans. The remaining 20% is attributed to at-sea losses from ocean going vessels, from lost or abandoned fishing gear and from accidental or intentional dumping. Plastic trash has the greatest potential to harm the environment. It can be found floating at the surface, suspended throughout the water column and residing on the floor of almost all water bodies. It is transported by rivers to the ocean, where it moves with the ocean currents, and persists in that environment for years, breaking down into smaller and smaller pieces. 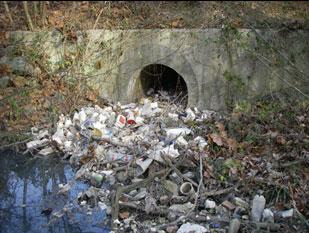 Trash can be transported from inland areas to coasts by wind, stormwater conveyances, and streams and rivers. Models developed by Martinez et al. 2009 1 suggest that marine debris deposited in the coastal zone tends to accumulate in the central oceanic gyres within two years after deposition.

Once in the ocean, vertical transport of trash, particularly plastics, is complex. It requires an understanding of the biophysical and chemical processes that contribute to plastic breakdown and buoyancy (Ye and Andrady 1991 2). Approximately half of all plastics are neutrally to positively buoyant (U.S. EPA 1992 3) and thus remain close to the ocean surface. With time, as the plastic breaks down into smaller pieces, organisms and sediment accumulate, adding weight to the plastic particles and causing them to sink and eventually reach the sea bed (Barnes et al. 2009 4). The other approximately half of plastics sink until reaching neutral buoyancy or resting on the the sea floor. Most studies have explored plastic accumulation from the ocean surface down to a depth of approximately 30 meters (100 feet) (Moore et al. 2005 5). 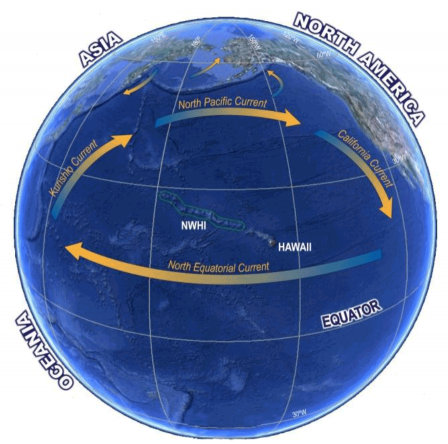 Several studies have identified the primary transport mechanisms by which marine debris accumulates in the convergence zones of the world's oceans (Kubota 1994 6, Martinez et al. 2009 1, and Ingraham and Ebbesmeyer 2000 7). These mechanisms are a combination of Ekman transport and geostrophic currents, and to a lesser degree, Stoke's drift. Ekman transport is a wind-driven ocean current, and has a net direction at right angles to the prevailing winds in the Northern Hemisphere (Pond and Pickard 1983 8). Geostrophic currents are ocean currents that travel at right angles to horizontal (from high to low) pressure gradients (Brown et al. 1989 9). Stoke's drift is the net transport of water in the direction of waves (Pond and Pickard 1983 8). The coupling of these atmospheric and oceanographic processes creates the oceans' convergence zones, where trash accumulates.