Case Studies in Prevention, Control and Reduction of Marine Debris 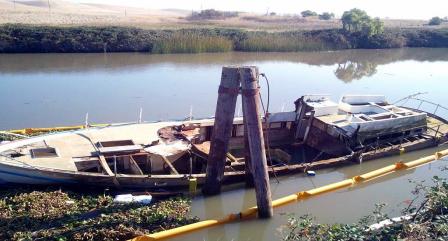 Abandoned vessels pose a high risk of water contamination.In the past few years, EPA has focused significant efforts toward removing threats to human health and the environment posed by the largest type of marine debris -- abandoned and derelict vessels at several sites on the West Coast. Vessels that are in severe disrepair or lack visible ownership typically harbor hazardous substances and/or oil. Existing federal pollution response authorities and funding sources were used to evaluate and mitigate these risks, including the Comprehensive Environmental Response, Compensation and Liability Act (CERCLA), the Clean Water Act (CWA) as amended by the Oil Pollution Act (OPA), and their implementing regulations, found in the National Oil and Hazardous Substances Pollution Contingency Plan (the NCP). 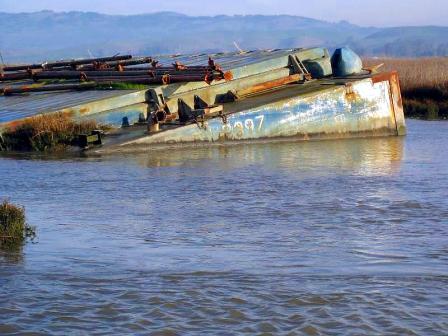 Abandoned and derelict vessels have been found containing oil, asbestos, lead based chemicals, and many other varieties of hazardous substance; All of which would make the surounding water dangerous for wildlife and humans.EPA's Pacific Southwest Region has coordinated with the Coast Guard and California EPA (CalEPA) on abandoned vessel and marine debris cleanups in Northern California, including in the Petaluma River, Bodega Bay, the Bay-Delta, Sacramento River, Humboldt Bay, Tijuana Estuary, and the Oakland Estuary in San Francisco Bay. Since 2011, EPA and its federal and state partners removed more than 200 abandoned vessels and other large marine debris at these sites at a total cost of approximately $15 million.

Of this, approximately 40% came from EPA's Regional Superfund Advice of Allowance and 20% from the National Oil Spill Liability Trust Fund. The remainder, approximately 40%, was contributed by CalEPA and included a $650,000 grant from the Cosco Busan Oil Spill Settlement fund administered by the National Fish and Wildlife Foundation. The projects included removal of abandoned vessels, dilapidated piers, and debris piles containing hazardous waste containers, oil tanks, lead-based paints, asbestos, marine batteries and e-wastes, among many other contaminants and solid waste. 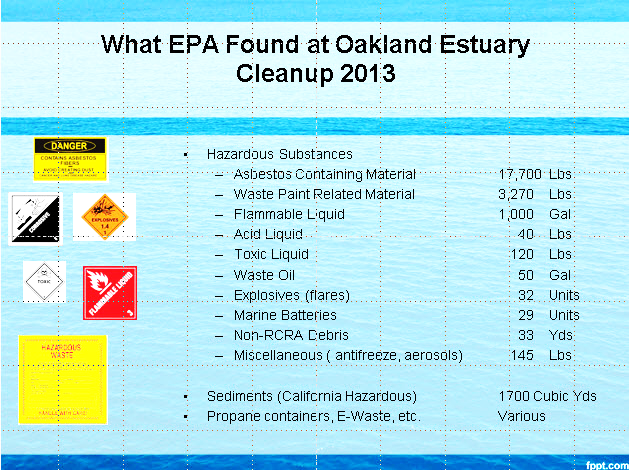 These cleanups provided valuable lessons for future actions, demonstrating that the sooner an abandoned vessel or other large marine debris is removed from the aquatic environment, the less expensive the operation and the less impact on the environment. For example, in 2013, as part of the CERCLA Oakland Estuary Marine Debris Removal Action, EPA spent more than $3 million just to pump out an estimated 1,700 cubic yards of contaminated sediment from two large sunken tugs before they could even be raised to address the oil and hazardous substance threats.

One of these boats, the 150 foot tugboat "Respect," was a long-standing candidate for removal prior to sinking because it posed a potential obstruction and hazard to navigation. EPA's analysis indicated that had the boat been removed under the Rivers and Harbors Act while it was still floating in 2007, the estimated cost of removal would have been less than $500,000 would have prevented the release of oil, asbestos, and other contaminants that entered the estuary after sinking. 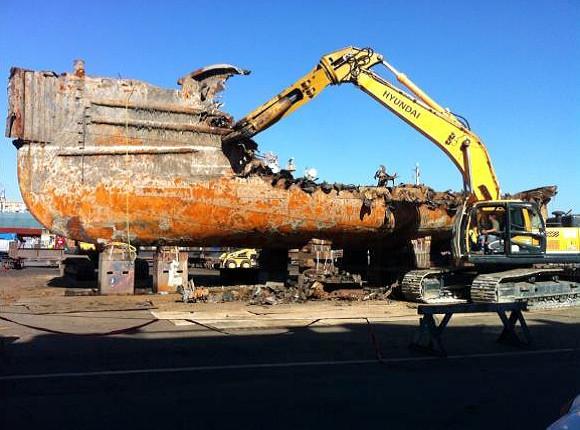 The 150 foot T/V Respect after being pulled out of the Estuary. 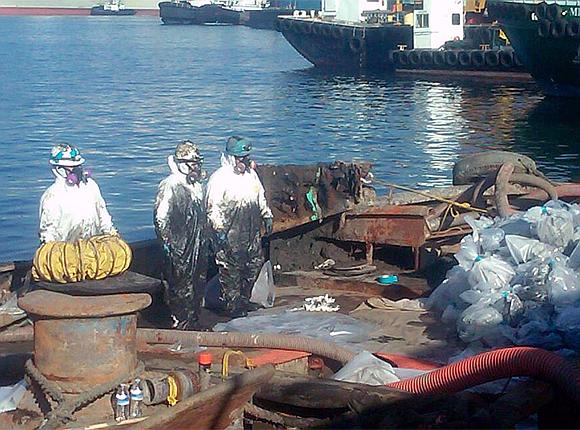 Workers covered in oil after removing almost 18,000 lbs. of asbestos found on the T/V Respect.In August 2012, CalRecycle requested assistance from the U.S. Army Corps of Engineers, Coast Guard, and EPA in a joint venture to raise, evaluate, assess, and remove abandoned wrecks and other marine debris from the Oakland Estuary, including the shoreline along Coast Guard Island and San Leandro Bay. EPA offered to be the lead federal agency, with the Army Corps and District-11 Coast Guard units offering resources and support. The site had four sunken abandoned wrecks and other clusters of marine debris containing hazardous substances.

One of the vessels that posed a threat to the environment was the sunken 150-foot tugboat Respect. During sediment removal, a fuel tank was discovered containing 31,000 gallons of oil-laden sediment. Coast Guard Sector SF units assisted in raising the Respect and removing the contaminated sediment. By its completion in 2013, this joint initiative removed 72 derelict vessels along with 1,700 cubic yards of contaminated sediments and 10.5 tons of hazardous materials. 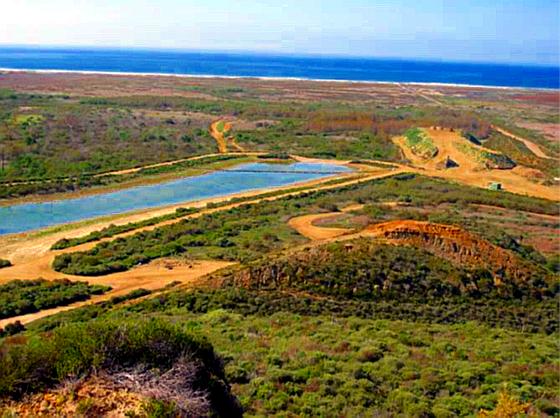 Plastic debris and particles can have toxic effects on coastal resources. Border Field State Park in Imperial Beach (San Diego County, Calif.) is a case study in debris and plastic particle accumulation. Sediment and associated plastic debris, carried by the Tijuana River and its tributaries, have led to extensive loss of wetlands habitat in the Tijuana Estuary. To prevent the deterioration of wetland habitat here, a retention basin was built at the mouth of the Goat Canyon Tributary, to trap an estimated 40,000 cubic yards a year of sediment and debris.

Currently, sediment management consists of annual excavation, mechanical screening to remove plastic debris, and stockpiling at a staging pad adjacent to the sedimentation basin. EPA has partnered with the Tijuana River National Estuarine Research Reserve (TRNERR) of California's State Parks Department in an effort to characterize pre-existing and post-screening plastic content and potential contamination. EPA conducted sampling and analysis of the sediments, analyzing them for plastic particles and assessing the particles for toxic chemicals such as PCBs, pesticides, PBDE and PAHs that sorb (take up or hold) to the particles.

The results are similar to those found by researchers studying the chemical concentrations sorbed to plastic particles in the open ocean. 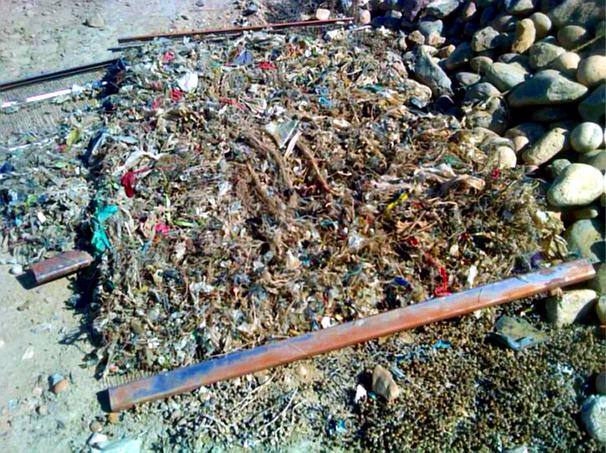 Plastic debris accumulated on a 1/4" screenWhile the sediment itself contained very low to non-detectable concentrations of the chemicals, the plastic particles exhibited levels of the chemical contaminants 100 to 100,000 times higher than the surrounding sediment. The results of this study complicate plans for sediment disposal or reuse. It's necessary to determine whether there are human or ecological health risks involved in the final disposition of these fine-grained sediments. 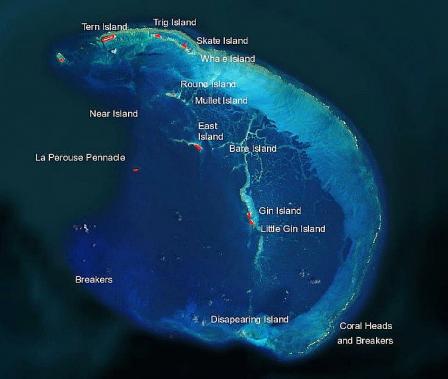 Tern Island and the French Frigate ShoalsIn a November 2013 response to the Center for Biological Diversity's petition for a Preliminary Assessment (PA) of the impact of plastic marine debris within the Northwestern Hawaiian Islands, EPA's Pacific Southwest Regional Office announced the Agency's plan to conduct a PA on Tern Island, in the Papahānaumokuākea Marine National Monument. The island, which is currently managed by the U.S. Fish and Wildlife Service (FWS), had been used as an airstrip and aircraft refueling station during World War II, and latger as a Coast Guard long-range navigation (LORAN) station. As a result, the island contains numerous dumps with buried electronic equipment and other waste. 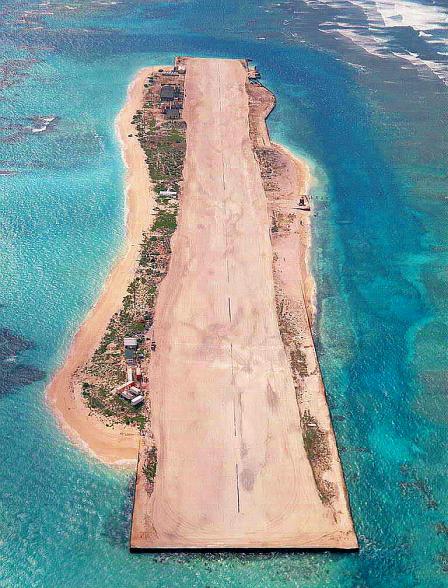 Tern Island when It was used as a runway during World War IIIn partnership with the U.S. FWS, EPA evaluated potential and observed releases of hazardous substances from Tern Island, including chemicals that adsorb to small plastic particles (microplastics) in the surrounding surface water. Because Tern Island provides critical breeding and foraging habitat for the endangered Hawaiian monk seal and the threatened Hawaiian green sea turtle, EPA noted that it "presents a scientifically meaningful opportunity to evaluate the potential toxicological impact of plastic marine debris ingestion on highly sensitive receptors." The federal and State of Hawaii partners and stakeholders involved in this project all agreed that further investigation and cleanup activities at Tern Island and French Frigate Shoals are necessary.