Managing and Transforming Waste Streams – A Tool for Communities

In 2005, the City of Austin, Texas, signed the Urban Environmental Accords (pdf) Exit, which committed the city to achieve zero waste by 2040. In 2009, the city adopted the first Zero Waste Strategic Plan (pdf) Exit in the state of Texas. The Zero Waste Strategic Plan indicated that the value of materials sent to landfill and lost to the local economy was over $40 million annually.

In December 2011, the City Council adopted the Austin Resource Recovery Master Plan Exit to help implement the Zero Waste Strategic Plan. The Master Plan calls for the City to move from 38% waste diversion to 75% by 2020 and 90% by 2030. This ambitious goal is being implemented in collaboration with residents and businesses, including many local private hauling, recycling, and composting service providers. 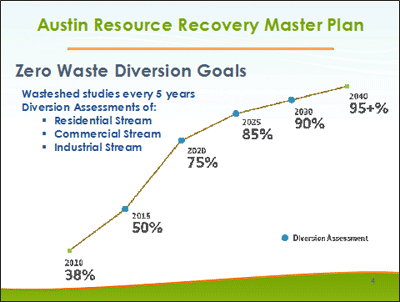 The primary Austin Zero Waste Master Plan strategy is to build on existing private sector services to accomplish its goals and not to expand the city’s municipal services beyond its current Circle of Control.

Circle of Control refers to services that the city provides, mostly to residential customers, which the city can adjust on its own, while Circle of Influence in Austin refers to the multifamily and commercial generator sectors that are responsible for arranging their own recycling, composting, and garbage services. The Master Plan calls for the city to influence the multifamily and commercial sectors as well as private service providers through the adoption of new rules and incentives.

The Austin Resource Recovery Department Exit collects solid waste and recyclables weekly from households and selected commercial accounts, including: multi-family dwellings of four units or less, small city facilities and small businesses utilizing carts in residential areas. In 2011, the city contracted with two companies to each process about 50% of the recyclables collected in Austin. Most large multifamily complexes and commercial generators contract with their choice of private hauler for garbage, recycling and organics (compost) collection. The city also contracts with another hauler to collect garbage from businesses and residents in the congested Central Business District.

The city operates a household hazardous waste facility and drop off center for recyclables. There are three private landfills and two publically owned landfills within 10 miles of Austin. City collection trucks haul garbage to a landfill south of the city. The city’s publicly owned landfill closed in 2010. 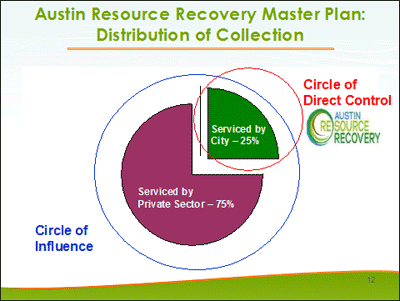 During the Zero Waste Strategic Plan process, zero waste policy and program options were identified in the following categories:
Policies and programs were organized into three additional categories:

The new rules adopted by the city and identified in the Master Plan have resulted in the development of extensive private sector collection and processing infrastructure, including construction and demolition materials (C&D) processing, food scrap composting, and recyclables processing. The ordinances and proposed policies included: