The Friday before Memorial Day is Don't Fry Day!

The National Council on Skin Cancer Prevention designated the Friday before Memorial Day as Don’t Fry Day. The Council’s goal is to encourage sun safety awareness by reminding everyone to protect their skin while enjoying the outdoors on Don’t Fry Day and every day.

Remember to Slip! Slop! Slap! and Wrap! when you're outdoors. Slip on a shirt, slop on sunscreen of SPF 30 or higher, slap on a hat, and wrap on sunglasses. 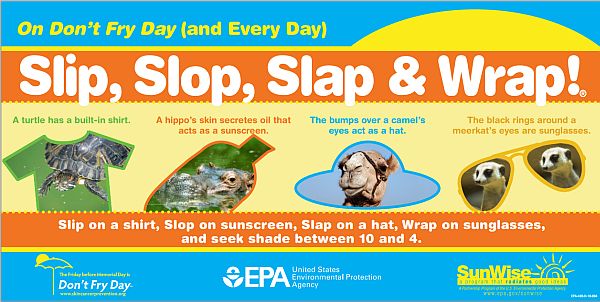 We encourage you to talk on your social media network about being SunWise, on Don't Fry Day and every day. Exit

I was first diagnosed with melanoma when I was 19 years old. I found a new black mole on my leg that was as small as the tip of a pencil but with jagged edges. I immediately called my doctor and was able to catch the cancer at Stage I. More than five surgeries later, the melanoma was gone.

But seven years later, it was back. This time the melanoma showed up as a larger black mole, which grew to the size of a quarter over a weekend. I called my doctor immediately and had two more surgeries to remove the melanoma.

Telling my father that his only child had melanoma was one of the hardest things I’ve ever had to do. He worried that he would never walk his daughter down the aisle, but this summer he finally had the chance! After nearly 10 surgeries in total, I have been cancer-free now for 5 years.

Since my diagnoses, I have been vigilant about checking for skin changes and wearing sunscreen when I’m outdoors. I’ve also been inspired to spread the word about skin cancer prevention and the power of early detection by telling my story. If you find a suspicious mole, call your doctor right away!