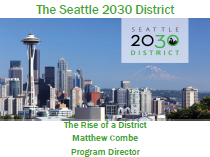 The Seattle 2030 District (S2030D) has completed estimating building energy, water, and transportation greenhouse gas (GHG) emissions baselines and reduction targets. The S2030D is working on a proposal to combine stormwater and potable water use reduction into one integrated water goal for the District.

The S2030D Building Dashboard was launched as part of the Seattle Smart Buildings Pilot Project and is tracking the real-time energy and water performance of member buildings and displaying the progress towards achieving efficiency goals. As of June 2013, at least 124 properties have shared energy and water data in the S2030D Portfolio Manager account. S2030D has begun to prepare and send performance reports to property owner/manager members that anonymously show how their buildings are performing compared to similar sized buildings of the same use.

The S2030D is continuing to develop District services and programs including offering energy efficiency contracting packages to S2030D member buildings. The energy efficiency upgrade improvements have been completed for two properties and the projects were reviewed to identify which tools and strategies were most effective. In July 2013, the New Buildings Institute received a grant from the Northwest Energy Efficiency Alliance (NEEA) to deploy their Firstview program, a software that allows the extraction of more targeted and useful energy performance information from basic data inputs, in 120 buildings in the S2030D. NEEA is also providing funding for the Weidt group, based in Minneapolis, to use their B3 modeling program to create local baselines for all 1,200 buildings in the S2030D, making those baselines more relevant than the regional median currently used.

The City is also implementing the Streamlined Permitting Services program, which has the goal of reducing the overall permitting processing time by 25%. Lastly, S2030D has held four of its series of five Efficiency Finance Workshops, which focus on energy management strategies for building managers.

The City of Seattle is partnering with the S2030D Planning Committee, which includes property owners, utilities, healthcare providers, and community stakeholders, to "activate" the District. The City is developing energy efficiency services for new and existing buildings, defining membership expectations, and providing stable administrative support for the project. This seed investment is enabling the District to develop sustainable funding strategies for supporting carbon reduction actions on an ongoing basis.

The first goal of the project was to create an organizational framework for the program. This included hiring a professional director tasked with developing the organization and designing a self-sustaining funding strategy, as well as training property managers in how to utilize ENERGY STAR's Portfolio Manager to track building energy performance. The next step in activating the District was to collect building data and develop baselines and targets for energy use, VMT, and water use.

In addition, the City is working with approved Energy Service Contracting companies (ESCOs) to develop Energy Efficiency Contracting Packages that will meet the S2030D reduction targets. The City has developed a standardized contracting approach that makes it easier for building owners to compare between contract packages. The City's Department of Planning and Development is also creating a streamlined permitting approach for new construction and major renovations within the city. Finally, the City is conducting outreach to building owners to explain the streamlined permitting and contracting approaches.

The Climate Showcase Communities grant is allowing the City of Seattle to create a foundation on which to build S2030D, which provides a replicable model of a healthy and efficient urban space. This foundation will include a sustainable funding strategy, energy efficiency contracting packages, and streamlined permitting services that will enable S2030D to meet its ambitious targets. The City is combining this foundation with continuous progress assessment and outreach beyond city borders to set an example for efficient cities worldwide.