CNY RPDB used approximately 40% of the CSC grant funding to provide sub-grants to seven target communities in the region that implemented pilot projects demonstrating the effectiveness of energy efficiency initiatives and renewable energy technology. The remaining funding was used to provide technical assistance and initiate the Central NY Energy Challenge. Overall, the participating municipalities identified strategies that could reduce GHG emissions 12.7% below the baseline. Through the demonstration projects, C2IP realized lifetime GHG emissions reduction of 2,861.5 metric tons of CO2-equivalent (MTC02e), comparable to the annual emissions of more than 600 passenger vehicles. Total community-wide pledged emissions reductions from Climate Action Plans total an additional 151,082 MTCO2e, equivalent to the annual energy use of nearly 13,800 homes.

Staff from the CNY RPDB launched a kickoff workshop for the participating communities that provided an overview of relevant renewable energy programs within New York State and outlined the Climate Action Plan process. Communities were offered a path for local governments to start taking climate action to mitigate climate change. Representatives from U.S. EPA, NYS Department of Environmental Conservation (DEC), non-profits, and other municipalities that had completed emissions reductions plans attended and to provide first-hand knowledge of the process and encourage relationships among the municipalities and supporting staff. 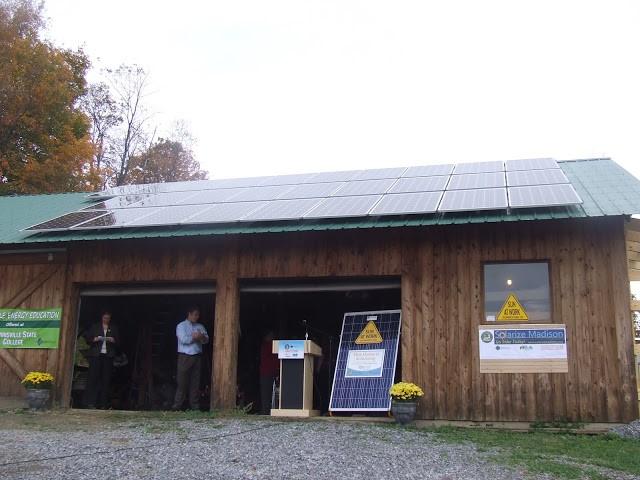 An important part of C2IP was to identify, develop, and deploy demonstration projects in each community. CNY RPDB provided up to $30,000 in matching funds to seven participating communities, three of which are highlighted below. CNY RPDB also offered technical assistance in the planning process to extend the impact of the funding.

Solarize Madison – The purpose of the Solarize Madison initiative was to streamline the solar installation process and make solar more affordable for residents, either through direct ownership or a leasing program. In exchange for a $2,000 installation incentive, homeowners helped market the solar program by hosting an open house, writing an article in the local paper, or producing an information video about their solar PV system.

Syracuse – The City of Syracuse replaced 38 incandescent streetlight bulbs along Syracuse Creekwalk with new lighting that will consume 78% less power. At a cost of $30,400 the lighting has a long return on investment, but the upgrade was integral in initiating a larger project to revitalize the public Creekwalk. The project enhances community safety, walkability, and aesthetics.

C2IP also sought to implement energy savings programs that would engage communities, and looked across the country for inspiration. It examined programs such as MN Energy Challenge Platform Exit, Energize NY Exit, NE Carbon Challenge Exit, and Finger Lakes Energy Challenge Exit.  C2IP studied successful elements of each of these programs and developed a partnership with NYSERDA to create the Central New York Energy Challenge. The challenge consisted of friendly competitions between teams of households to see who could save the most energy. The Behavior Research division at NYSERDA identified five specific actions households could undertake:

Teams consisted of five to eight households and a team leader. Additionally, C2IP distributed Kill-a-Watt monitors to libraries so that residents could borrow the tool to monitor and reduce their energy consumption.

Preble - The total project cost was $136,000, but with grants from C2IP, NYSERDA, and National Grid, Preble will pay back its investment cost in just under 6 years, and will reduce emissions by 19.53 MtCO2e annually—equivalent to avoiding the consumption of more than 2,000 gallons of gasoline. The initial grant amount of $30,000 more than quadrupled after taking advantage of incentives. As a result of the project, the town hall no longer needs to consume fossil fuels on site.

Madison – In total, Madison County received a grant of $28,000, but took advantage of over $100,000 from NYSERDA and $185,000 in private investment. This extra funding increased the investment from the initial grant amount more than 10-fold. The program installed 25 direct-owned solar energy systems totaling 157.7 kilowatts (kW), and 4 leased systems totaling 26.5 kW. The program prompted other companies to match the Solarize Madison incentives, resulting in additional installations that eclipsed 300kW of production. Solarize Madison is now continuing the program, expanding it to include solar thermal for hot water heating. Additionally, two other Solarize events, Solarize Tompkins SE Exit and Solarize Brooklyn Exit, have been created due to the success of solarize Madison.

Central New York Energy Challenge – Overall, 9 teams (63 people) participated in the pilot program, with the goal of reducing electricity consumption by 10%. Data show that the average participant in the program used 29% less energy than the average control group participant for the month of June 2012. The program was so successful that it was expanded to surrounding localities such as Skaneateles, Preble, and Syracuse.

Energy savings programs through community engagement projects often face challenges with data collection. Historically, programs in New York were either based on self-reported (and potentially inaccurate) data or prohibitively expensive data collection methods. C2IP addressed these competing challenges by starting an energy competition based on low- and no-cost actions with verifiable and measurable data that were already collected by utilities.

Emissions inventories can be time- and resource intensive, and smaller townships had neither the time nor the resources for the process prior to the grant. The CSC grant provided financial resources for CNY RPDB to offer technical support to assist municipalities with their inventories. Without the CSC grant, the small municipalities would not have been able to complete the inventory process.

“Local climate action can be taken in many types of communities, including large and small communities in urban, suburban and rural settings, as long as the issues are framed properly and meet community needs. Reducing costs and saving taxpayer dollars resonate with most local government officials and community residents.”

After many of the demonstration projects and community initiatives concluded, CNY RPDB staff conducted public information sessions and spoke at conferences across New York State. Public information sessions allowed municipal representatives to share knowledge and best practices with their neighboring towns and cities. Additionally, NYS DEC conducted a webinar to share ideas and engage stakeholders more broadly. Throughout the duration of C2IP, CNY RPDB continually worked with participating communities to assist them in the climate action process.

Mayors in Oswego and Cortland have challenged each other to enlist members of their communities in the Energy Challenge. Materials were distributed in each city with the potential of enrolling 120-200 households in the friendly competition.

CNY RPDB has expanded the Energy Challenge into the classroom environment and created a program called “Classroom Energy Challenge.” Syracuse will launch two pilot programs in 2015.

Staff Needs: Larger jurisdictions, such as Syracuse and Madison) required 1 FTE staff plus ancillary support in order to complete their GHG inventory and climate action plan. Smaller localities (such as Preble and Skaneateles) completed projects with volunteer support, in addition to between 100 and 200 hours of staff support.)

Cost: The total grant amount was $497,793, of which $208,000 was used for sub-grants to develop the seven pilot projects. With this seed funding, the communities were able to leverage an additional $1.94 million in regional, state, and private funding to complete the demonstration projects.