A large body of research has demonstrated that land use and urban form can have a significant effect on transportation outcomes.

An EPA-funded meta-analysis of the research, Travel and the Built Environment(31 pp, 221 K) Exit, summarized the measurable effects of several built environment variables on residents’ travel behavior [i]. These findings can help inform travel demand studies as well as land use and transportation planning studies. However, developing data about these characteristics can be expensive and time consuming.

To respond to this need, EPA developed two data products that consistently measure the built environment and transit accessibility of neighborhoods across metropolitan regions and across the United States. Each of these products summarize the characteristics of census block groups [ii]. Users can download data, browse the data in interactive maps, or access the data through web services[iii].

To download data for the entire nation, go to the EPA Environmental Dataset Gateway and download the following files by right-clicking your mouse on the file to save it:

The Smart Location Database is a nationwide geographic data resource for measuring location efficiency. It includes more than 90 attributes summarizing characteristics such as housing density, diversity of land use, neighborhood design, destination accessibility, transit service, employment, and demographics. Most attributes are available for every census block group in the United States.

Figure 1 illustrates one of the variables in the Smart Location Database. The map shows patterns of spatial variation in transit service availability and density in Los Angeles and its surrounding cities and suburbs. 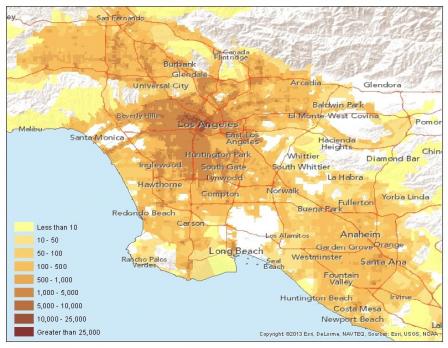 * Only available in areas served by transit agencies that share their transit data in GTFS format Exit.

Access to Jobs and Workers Via Transit is a free geospatial data resource and web mapping tool for comparing the accessibility of neighborhoods via public transit service. Indicators summarize accessibility to jobs as well as accessibility by workers, households, and population.

Coverage is limited to metropolitan regions served by transit agencies that share their service data in a standard format called GTFS Exit. The Access to Jobs and Workers Via Transit - Technical Documentation and User Guide includes a full list of those areas.

Figure 2 shows one indicator from this dataset mapped for the Washington, D.C., metropolitan region. 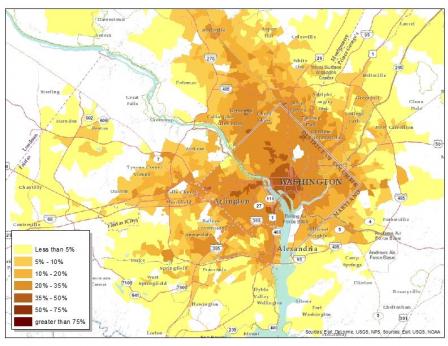 Sample Variables Included in This Dataset

[ii] Block groups are contained within census tracts and generally contain between 600 and 3,000 people, with an optimum size of 1,500 people. The land area of block groups varies based on population density.

[iv] The ArcGIS.com interface may be confusing for first-time users. Read our Tips for Using the Smart Location Database Mapping Tool.

[v] Use EPA's Clip and Ship to download GIS data for a selected geographic area of interest. Click to expand the "EPA Nationwide Data" list, then scroll to find the dataset of interest.