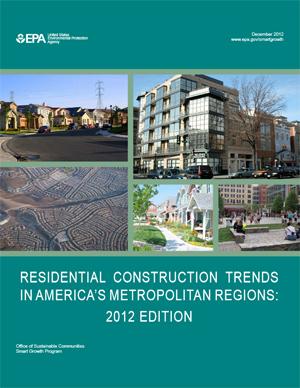 Residential Construction Trends in America's Metropolitan Regions: 2012 Edition compares the location of new homes to data about pre-existing land cover to determine where infill development was taking place in 209 U.S. metropolitan regions between 2000 and 2009. The findings affirm the overall conclusions of the previous two reports while painting a more geographically detailed picture of infill development trends.

This report finds that:

See the main Residential Construction Trends in America's Metropolitan Regions page for more context on these trends and links to earlier research.