Our Built and Natural Environments 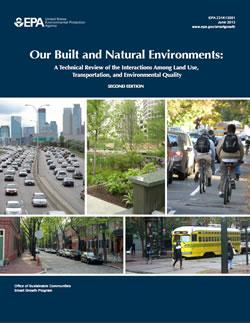 A Technical Review of the Interactions Between Land Use, Transportation, and Environmental Quality (2nd Edition)

Decisions about how and where we build our communities have significant impacts on the natural environment and on human health. Cities, regions, states, and the private sector need information about the environmental effects of their land use and transportation decisions to mitigate growth-related environmental impacts and to improve community quality of life and human health. In 2001, EPA published Our Built and Natural Environments: A Technical Review of the Interactions Between Land Use, Transportation, and Environmental Quality to show how development patterns affect the environment and human health. Since then, research has continued to clarify and better explain these connections. To capture this research, EPA revised and updated the report in 2013, incorporating key findings from hundreds of studies.

The second edition of Our Built and Natural Environments:

EPA's Smart Growth Program has many resources that give more information on development strategies that reduce environmental and health impacts while improving quality of life, providing more housing and transportation options, and achieving other community goals. See Smart Growth Publications and Smart Growth Topics for links to these resources.

1Full citations for all of the findings are in Our Built and Natural Environments.​​