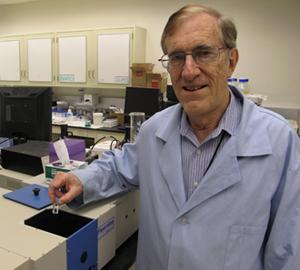 EPA scientist Richard Zepp at work in the lab.

Discovering How Nanomaterials Change in the Environment

Dr. Zepp is an Adjunct Professor at the Rosenstiel School of Marine and Atmospheric Sciences, University of Miami, Florida and at the State University of New York, Syracuse (Department of Chemistry). Since 1995, he has been a member of the United Nations Environment Programme Panel on Environmental Effects of Ozone Depletion.

I study nanomaterials, such as carbon nanotubes and nanosilver, which are used in a wide variety of consumer products to do things such as make them stronger, conduct electricity or disinfect bacteria. At EPA, we’re interested in the persistence of these materials in the environment and how they interact and change over time. The release of these materials from plastics and coatings is one area where I have focused my research. This information will help us predict how humans and other organisms could be exposed to these chemicals.

I also research pathogen indicators, which are organisms EPA uses to track biological contamination in recreational water, like enterococci or E. coli. We’ve developed a software program called Virtual Beach that looks at local environmental conditions and predicts contamination problems before they happen. This helps state and local managers advise the public if a beach shouldn’t be used on that day because of contamination. Contributing to the development of this project was really gratifying because it’s being used in many parts of the United States to protect public health.

If you could have dinner with any scientist, past or present, who would you choose and what would you like to ask them?

I would say Galileo. He’s often been called the father of modern science and was one of the architects of the scientific method. He went against what was commonly accepted in his day and really believed in what he worked on.

Another would be an Italian scientist, Giacomo Ciamician, who conducted pioneering research on the chemical effects of light exposure and was one of the first to recognize that the release of fossil-derived carbon into the atmosphere was going to cause some big problems.

I’d like to ask them, “How did you become so interested in these broader issues?” Sometimes it’s hard to break out of a smaller discipline and broaden yourself into other types of activities, but these guys were both capable of doing that.

My work provides an opportunity to conduct both laboratory and field studies, which is unique because in most research jobs you focus on one or the other. Another thing I enjoy about the job is communicating the research and having interactions with people who are using the research. It’s very gratifying to see people are using your research to solve existing problems. 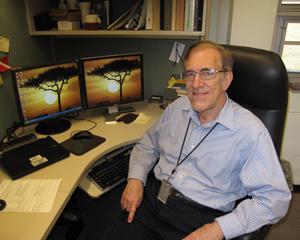 Zepp at his desk.

I did my undergraduate studies at Furman University and received a Bachelors degree in chemistry. I got a Ph.D. in organic chemistry at Florida State University in Tallahassee and participated in postdoctoral research at Michigan State University.

Any advice for students interested in a career in science?

I think students that are interested in this type of work should try to get involved by working on a project in a research lab. I think that’s the best way to get your feet wet, either in high school or college. Look for something going on near you this summer.