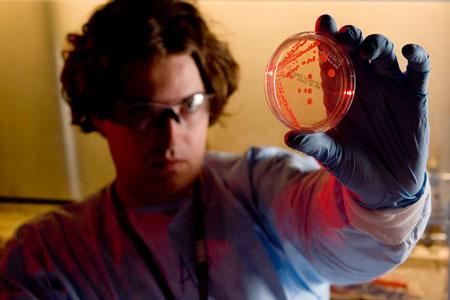 In 2010, a clam boat off the coast of Massachusetts dredged up some most unwelcome bounty: old, World War I era munitions. Shortly after the haul, one of the crew members came down with symptoms consistent with exposure to mustard gas, a chemical weapon and nerve agent.  Almost immediately after the sickened deckhand was rushed to the hospital (he survived), EPA scientists and engineers moved in to help analyze the suspected culprit in the old munition, and assist with decontamination and cleanup operations.

“We knew mustard gas was the target to test for because both clinical symptoms and test results from the crew member were available before any environmental samples even arrived at our laboratory,” said Ernest Waterman, Laboratory Branch Chief at EPA’s New England Regional Laboratory in Chelmsford, MA.

For the clean-up effort, the regional lab was able to perform all the environmental sample testing in-house. However, Waterman says, “Had there been a need to send samples to other labs around the country it would have been important that all the labs use the same method of analysis.  At the time, there were no plans in place on how to achieve that, so I think it would have taken some time to ensure that we were, in fact, all going to analyze the samples in the same way. If this had been a large-scale event, we would not have been able to move as quickly as we would have liked.”

To help in such scenarios, EPA homeland security researchers have developed a library of selected methods, the Selected Analytical Methods for Environmental Remediation and Recovery, or SAM for short. The guide helps labs around the country quickly and efficiently select the appropriate environmental testing and analysis methods to use after a wide-scale event.  It’s part of a research program that for nearly a decade has been helping the nation be better prepared for an accidental or deliberate release of chemical, biological or radiological agents.

Teams of experts worked with EPA reviewing and revising lists of chemical, biological and radiological substances that could cause mass harm. EPA’s focus is to make sure laboratories nationwide have the capability to test for these substances and that the testing can be done the same way across all the laboratories, so that one lab’s results can be easily compared with another.
SAM is not a plan on how to handle an emergency, but rather a library of selected methods that laboratories can use as a guide to run their tests. The testing protocols cover several hundred harmful substances ranging from mustard gas and ricin to plutonium and others that could cause the plague or typhoid fever.

“The nice thing about SAM is you can click onto the method and it provides resources that labs can use in a major incident or accident,” said Dr. John Griggs, director of EPA’s National Analytical Radiological Environmental Laboratory in Montgomery, Ala., and coordinator of the radiological section of SAM.

“At regular intervals we go and see if we need to add other radionuclides and then select appropriate methods based on information received from Homeland Security or intelligence. It’s an ongoing process.”

In the case of an act of terrorism or other major incident requiring coordinated, large-scale laboratory response, labs need to analyze many samples taken from the air, water, soil, and indoor and outdoor surfaces. Using the selected methods identified through SAMshould  increase the speed of analysis and improve data comparisons among labs across the United States.
“When an incident produces multiple samples,  a large network of labs will be required to conduct the analysis simultaneously,” said Kathy Hall, a health physicist at EPA’s National Homeland Security Research Center in Cincinnati, Ohio and a coordinator for SAM.  “What we are looking at is ways we can produce comparable results when we use state and commercial labs to analyze samples.”

EPA is preparing the 142 private and government labs that are part of the Environmental Response Laboratory Network with a list of selected methods to help keep the sampling and analysis consistent when it’s most important.