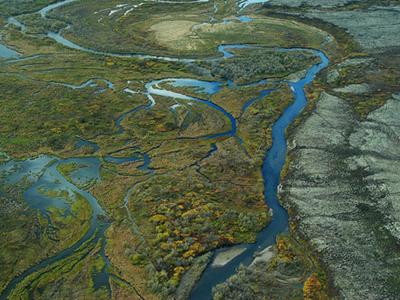 Aerial view of braided wetlands and tundra typical of the Bristol Bay watershed in Alaska. The Upper Talarik Creek (shown here) flows into Lake Iliamna and then the Kvichak River before emptying into Bristol Bay.

In the heart of southwestern Alaska lies the Bristol Bay watershed. The watershed supports all five species of Pacific salmon, which collectively form the foundation of a large commercial, sport, and subsistence fishery valued at more than $365 million per year, including the largest for sockeye salmon anywhere.  Nearly fifty percent of the world’s wild sockeye are produced in Bristol Bay, averaging some 25.7 million fish per year between 1990 and 2009.

Fish and other biological resources in the watershed also support a subsistence culture that has been practiced by Alaskan native tribes for thousands of years, representing one of the last intact, sustainable salmon-based cultures in the world.

In addition to abundant biological resources, the Bristol Bay watershed holds large deposits of valuable minerals.  The largest of which is the Pebble Deposit, a porphyry copper deposit estimated at 11 billion tons.  The deposit has the potential of supporting the largest mine of its type in North America with a potential value of $300 to $500 Billion.

The potential for large-scale mineral extraction activities in the watershed raised concerns about the impact of mining on the sustainability of Bristol Bay’s fisheries, and with it the future of some of the Alaskan native tribes that live in the watershed.

Several Alaskan native communities and other stakeholders asked EPA to use its authority under the Clean Water Act to restrict plans for future large-scale mining in the watershed. Other tribes and stakeholders who support development in the Bristol Bay Watershed requested that EPA take no action until a permitting process begins.

The first step in responding to these requests was science. The Agency called upon its researchers to develop an assessment to determine the significance of Bristol Bay’s ecological resources and evaluate the potential impacts of large-scale mining on these resources.

A team of researchers from EPA’s Region 10, EPA’s Office of Water, and EPA’s Office of Research and Development with expertise ranging from salmon biology, anthropology, geochemistry, mining, and risk assessment came together to complete the assessment.  Together, the research team reviewed information from peer-reviewed scientific journals, data from the Pebble Limited Partnership, state agencies, and traditional ecological knowledge from tribal Elders. They drew information from more than 700 scientific reference documents.

The researchers integrated this information and evaluated the potential impacts from large scale mining operations to provide insight into the impacts that such operations might pose to salmon fisheries and through impacts on fish, further impacts on wildlife and native Alaskan tribes.

The assessment team produced two drafts that received public comment and expert peer review.  The Agency received 230,000 public comments on the first draft of the assessment, and 890,000 on the second.  After reviewing public and peer review comments, EPA released its final report, An Assessment of Potential Mining Impacts on Salmon Ecosystems of Bristol Bay. Alaska.

“Over three years, EPA compiled the best, most current science on Bristol Bay to understand how large-scale mining could impact salmon and wetlands in this unique area of unparalleled natural resources,” said Dennis McLerran, Regional Administrator for EPA’s Pacific Northwest Office (EPA Region 10). “Bristol Bay is home to an extraordinary ecosystem with consistently productive wild salmon runs that are the economic and cultural cornerstone of the region. Our report concludes that large-scale mining poses real risks to salmon and tribal communities. The assessment is a technical resource for governments, tribes and the public as we consider how to address the challenges of large-scale mining and ecological protection in the Bristol Bay watershed.”