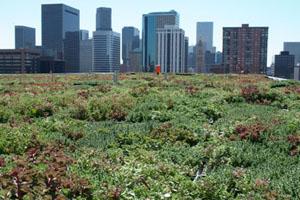 Green roof in a city

A new study by EPA researchers and partners shows how three types of roofing can help offset warming in urban environments.

Roofing is tough work. Steep angles make for dangerous conditions, metal roofing is remarkably sharp, and whatever material you work with, it’s guaranteed to be heavy.

During the summer, heat adds an almost unbearable element. This can be especially bad in metropolitan areas, where ambient temperatures combine with heat coming off numerous nearby roofs, pavement, and other elements to create an “urban heat island.”

EPA researchers and partners recently published findings in the Proceedings of the National Academy of Sciences showing how three types of roofing can help: “cool” (coated in a reflective material to eliminate heat buildup), green (vegetated), and hybrid (vegetated with reflective plants).  Hybrid roofs, which are a new concept and not yet available, would be constructed with light-colored plants that have higher reflectivity similar to cool roofs and also the advantages of green roofs, like water retention.

The authors found that any of these roofing options can have benefits by cooling urban heat islands. Thus, this helps to reduce the impacts of global climate change by cooling metropolitan regions.

Through EPA’s Integrated Climate and Land Use Scenarios (ICLUS) project, researchers had access to a wealth of modeled data focused on impacts from projected urban growth. Using these data, they explored the three methods of roofing designed to absorb less heat to compare and contrast benefits and trade-offs. What they discovered is that while all three  have positive environmental implications, green roofs have less heat-mitigating power than cool roofs (hybrid roofs cool at least as well as cool roofs alone), but cool roofs may mean that additional heating is needed during the winter in some areas.

Though roofing is a single component among major factors such as urban sprawl and carbon pollution, this study shows it can have an impact on reducing heat in large urban areas.

New roofing alternatives may offer an added component to innovative urban designs, new building styles and grid layouts created to offset urban heat islands. “Green cities” may not be a reality yet, but facets to such future cities are currently being considered and implemented. Interest in cooling down urban heat islands is growing and recently caught the attention of over 40 news outlets, including Popular Mechanics, Scientific American, Christian Science Monitor, USA Today, the LA Times, and several international newspapers.

Although roof installation may not get any easier, green and cool roofs may soon make American’s urban hotspots cooler.