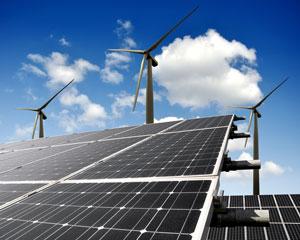 Much of the energy we use to power our homes, cars, and industries is also the main source of greenhouse gases (GHG) responsible for global climate change. It follows then, that limiting emissions from the combustion of these energy sources could contribute toward a stable, sustainable environmental future.

In one such effort, the results of which were recently presented in the journal Clean Technologies and Environmental Policy, EPA physical scientist Dan Loughlin and his research colleagues used an innovative modeling approach tapping the MARKet ALlocation (MARKAL) model to demonstrate a “breakthrough analysis” that researchers can use to identify technologies that can make a true difference in reducing GHG emissions.

MARKAL was created in the late 1970s by Brookhaven National Laboratory scientists to help partner researchers and others wade through the complex and far reaching differences and tradeoffs involved in making decisions and policies related to energy use. Over the next several decades, the model was improved and reworked to support new functionality, and to take advantage of increasing computational power. It is now one of several models that EPA’s own climate change researchers use.

“Breakthrough” in this case refers to a technology that can limit GHG emissions significantly and cost-effectively over the long haul, explains Loughlin. “We developed a methodology to examine the breakthrough potential of energy-related technologies, taking into account the complexities of the entire energy system.”

The researchers focused on MARKAL because of its comprehensive coverage of the energy system, from the importation, production, or manufacture of a particular energy source, right through its distribution and end use by a whole variety of interacting sectors.

“For example, using MARKAL we might ask ‘What would happen if the cost of solar photovoltaic technology goes down to 20 cents per kilowatt hour? Would it penetrate the market and yield significant reductions in GHG? Using MARKAL this way allows us to incorporate important multi-sectoral interactions in our analysis that would not be possible with less powerful tools,” says EPA engineer William Yelverton, who contributed to the breakthrough technology approach.

To demonstrate how such an approach could be used to support greenhouse gas mitigation decisions, Loughlin, Yelverton, and their EPA colleague Rebecca Dodder focused on a breakthrough analysis of utility-scale solar photovoltaics (PV). Their calculations suggest, for instance, that an 80% drop in the price of photovoltaics would lower the cost of cutting carbon dioxide emissions in the United States in half by $270 billion—potentially making it a technology breakthrough.

The research team plans to use this approach to evaluate and compare the breakthrough potential of additional energy technologies.

In their paper, they and their coauthors write: Fortunately, as a society, we have shown a great ability to innovate. Technology breakthroughs have led to putting humans on the moon and to downsizing electronics so that the smart phones in our pockets are more powerful than the supercomputers of several decades ago. Similar breakthroughs in low- and zero-carbon energy technologies will be needed to meet GHG mitigation goals identified as being necessary by the IPCC [Intergovernmental Panel on Climate Change]. This need raises important questions, such as ‘What constitutes a breakthrough?’ and ‘Where would breakthroughs be achieved most readily and most cost effectively?’

Together, EPA researchers Loughlin, Yelverton, Dodder and their partners are working to answer those questions, and help provide the science and tools needed to address global climate change.

Now used by some 77 different institutions in 37 countries, MARKAL is one of several models that EPA’s own researchers are using in innovative ways to provide the information and tools needed to identify and address the challenges of climate change. Other examples of EPA climate change methods, models, tools, and databases follow: