Pesticides are widely used in producing food to control pests such as insects, rodents, weeds, bacteria, mold and fungus.

Under the Food Quality Protection Act (FQPA), EPA must ensure that all pesticides used on food in the United States meet FQPA's stringent safety standard. FQPA requires an explicit determination that a pesticide’s use on food is safe for children and includes an additional safety factor, up to tenfold if necessary, to account for uncertainty in data relative to children.

The science and our understanding of chemical risk evolves and EPA continues to reevaluate each pesticide’s safety every 15 years. EPA’s continuous reevaluation of registered pesticides, combined with strict FQPA standards, major improvements in science, and an increase in the use of safer, less toxic pesticides, has led to an overall trend of reduced risk from pesticides.

Learn more about what EPA is doing to ensure that food is safe from pesticides:

EPA is confident that the fruits and vegetables our children are eating are safer than ever. Under FQPA, EPA evaluates new and existing pesticides to ensure that they can be used with a reasonable certainty of no harm to infants and children as well as adults. EPA works continually to review and improve safety standards that apply to pesticide residues on food.

It is important to note though, that just because a pesticide residue is detected on a fruit or vegetable, that does not mean it is unsafe. Very small amounts of pesticides that may remain in or on fruits, vegetables, grains, and other foods decrease considerably as crops are harvested, transported, exposed to light, washed, prepared and cooked. The presence of a detectible pesticide residue does not mean the residue is at an unsafe level. USDA’s Pesticide Data Program (PDP) detects residues at levels far lower than those that are considered health risks.

What has EPA done to decrease or restrict the amount of pesticides in food?

The 1996 FQPA directed EPA to completely reassess pesticide residues on food, with a special emphasis on the unique vulnerability of children. From 1996 to 2006, EPA used the improved safety standards in FQPA to cancel or restrict the use of 270 pesticides for household and food uses because they posed particular threats to children and infants. EPA also lowered the permissible pesticide residue levels for many kid’s foods – for example, apples, grapes, and potatoes.

The FQPA safety standard isn’t the only reason why EPA has been able to take so many steps to reduce children’s exposure to pesticides in recent years. Once a pesticide is registered for its specific uses, it is not left unchecked. Starting in 2007, EPA began the systematic reevaluation of all old pesticides.

Here are some of the most notable EPA actions in recent years:

We have seen, through USDA’s Pesticide Data Program (PDP) data, an overall decrease in the amount of pesticide residues in food, especially since the passing of FQPA in 1996. The stricter standards of FQPA and major improvements in science and data, and an increase in the use of safer, less toxic pesticides, has led to an overall trend of reduced risk from pesticides.

For example, from 1995 to 2013, children’s exposure to carbamates (a group of insecticides that affect the nervous system) fell by 70% – EPA canceled or restricted many carbamates during this time. From 1998 to 2008, tomatoes with detectable organophosphate pesticide residues fell from 37% to 9%, due to EPA canceling most organophosphates. It is important to note for some of the more recent actions, EPA expects declines will show up in future PDP data.

How does EPA regulate pesticides in food?

EPA evaluates every new pesticide and every new use for safety before registration. Before they may be sold, EPA must ensure that pesticides are safe for human health and the environment when used according to label directions. For each pesticide, EPA evaluates hundreds of different scientific studies.

Through these evaluations, EPA is ensuring the overall safety of proposed pesticide uses as required by FQPA. After pesticide registration, EPA reevaluates its safety every 15 years, taking into consideration any new data.

EPA’s process for registering and re-evaluating pesticides is not a closed-door process between EPA and pesticide manufacturers. EPA relies on the best science available and places high value on transparency in decision-making. The public is invited to comment throughout the decision-making process – we request studies and data, take our findings to independent expert panels such as the FIFRA Scientific Advisory Panel, and consult the National Academy of Sciences on broad scientific policy questions. The agency also frequently receive hundreds or even thousands of comments from the public on our draft assessments and proposed decisions.

Public concerns about specific pesticides and food safety do not go unnoticed at EPA. We take incidents of pesticide poisoning and exposure very seriously and look at those incidents as part of our review. EPA can and has used its authority to have products removed from the market immediately when risks are imminent.

At the same time that we review dietary exposure to pesticides, we also look at worker exposure and environmental exposure. Risks to workers and the environment can lead to cancelations as well, or restrictions on how and when a pesticide can be used, including, when appropriate, establishing ‘no spray’ buffer zones to protect the surrounding communities and waterways.

Before allowing the use of a pesticide on food crops, EPA sets a maximum legal residue limit (called a tolerance) for each treated food. The tolerance is the residue level that triggers enforcement action. That is, if residues are found above that level, the commodity will be subject to seizure by the government. EPA receives information on how much pesticide residue remains on various foods through the PDP. Through annual sampling, PDP has collected thousands of samples on 10-15 food commodities and can detect residues at levels far lower than those that that pose health risks.

Learn more about how we set pesticide tolerances for food.

Where can I find more information on pesticides in food? 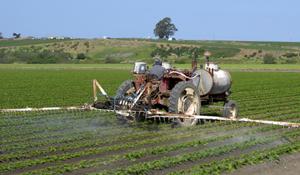 Government inspectors test food in interstate commerce to ensure limits are not exceeded:

USDA (the U.S. Department of Agriculture) measures residue levels for hundreds of pesticides and their metabolites in fruits, vegetables, grains, meat, and dairy products from across the country and food imported from other countries.

FDA (the Food and Drug Administration) also collects data on pesticide residues in cooked food that may be a source of chemicals in human diets.