The purpose of this web page is to provide information to school administrators and maintenance personnel on the hazards posed by PCBs in PCB-containing fluorescent light ballasts, how to properly handle and dispose of these items, and how to properly retrofit the lighting fixtures in your school to remove potential PCB hazards.

It should be noted that procedures outlined on this page (with the exception of disposal requirements) are a guide to assist building owners and operators. States may have mandatory and more stringent requirements than EPA.

What are the risks?

An intact FLB from a typical pre-1979 FLB

In 1976, Congress banned PCB manufacturing in the United States due to their toxic effects. In July 1979, EPA phased out the processing and use of PCBs, except in totally enclosed equipment. Some PCBs installed before the 1976 ban or after 1979 may contain PCBs, and may still be used in schools around the United States.

EPA authorized the use of small capacitors in FLBs in 1982. However, if the capacitors leak then the spill must be cleaned up within 24 hours and the leaking FLBs must be disposed of properly. This is in accordance with 40 Code of Federal Regulations (CFR), section 761.125 (c)(1) - Requirements for PCB Spill Cleanup and 40 CFR, section 761.62 - Disposal of PCB Bulk Product Waste. EPA regulations also require that all FLBs built between July 1, 1979 and July 1, 1998 that do not contain PCBs must be labeled "No PCBs."

Identifying FLBs that May Contain PCBs 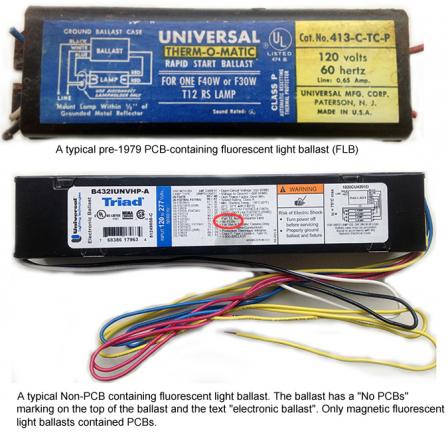 The following criteria are provided to help identify FLBs that may contain PCBs:

PCBs may be present as a yellow, oily liquid or in the tar-like potting material that leaks from the FLB. The capacitor does not always leak when the FLB fails, and a leaking capacitor does always cause FLB failure. A leaking or rupturing FLB may increase PCB levels in the air, therefore, measures should be taken to limit or avoid personal exposure.

Cost Savings Associated with a Retrofit of Older Lighting

Replacing old lighting fixtures can not only increase energy efficiency and decreases energy costs, but may also increase property values,

Energy Star Program - A joint EPA and DOE program that offers assistance through workshops and information services that can be accessed from the Internet.

State ProgramsExit - Check your state energy commission or with your local utility for more information. You may access your state's individual programs at the DOE's Database of State Incentives for Renewables and Efficiency (DSIRE)Exit

provides better lighting (in appearance and quality of light), and reduces the chance of emergency service situations. The retrofits can be done on an individual FLB basis (e.g., as found through visual inspection), or as part of a lighting retrofit which replaces the entire lighting fixture with newer, more energy efficient fixtures. A complete lighting retrofit eliminates the PCB hazards and increases energy efficiency by 30-50 percent (See the Energy Star website for more detailed information).

Lighting retrofits to eliminate PCB-containing FLBs should be considered as a component of any remodeling effort. The T12 lamp and corresponding FLB is less energy efficient than other FLB lighting (e.g., T8 or T5 lighting). The cost of replacing these fixtures can typically be recouped in less than seven years depending upon hours of operation and local energy costs. Detailed information on the savings that may be achieved and potential funding that may be acquired through an investment in new lighting is available at the Energy Star website. The website also provides information about funding that may be available for the replacement of old fixtures.

Recommended Procedures for Cleanup and Decontamination

An experienced contractor or facilities staff person remove, cleanup and decontamination PCB-containing FLBs that leak, smoke or catch fire. This includes management and disposal of PCB-containing wastes generated from cleaning up such incidents.

Check out the TSCA Disposal Requirements for FLBs for additional disposal options for PCBs and non PCB-containing FLBs.