Podcast: What is the EPA OIG Hotline?

What is the EPA OIG?

The Office of Inspector General performs audits, evaluations, and investigations of the EPA and its contractors to detect an prevent fraud, waste, and abuse. Learn more 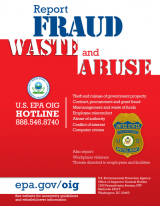 The EPA OIG hotline receives complaints of fraud, waste, and abuse in EPA programs and operations including mismanagement or violations of law, rules, or regulations by EPA employees or program participants. Complaints may be received directly from EPA employees, participants in EPA programs, or the general public. The Hotline accepts tips or complaints that, on a select basis, result in reviews of:

The EPA OIG hotline is staffed by federal law enforcement agents. Our Hotline is not staffed to support emergency responses.  In the case of a life-threatening emergency, please call 911 or, if appropriate, your state or local EPA or the police. Hotline complaints may be submitted by mail, telephone, fax, or e-mail. Hotline complaints are reviewed by auditors, evaluators, and/or criminal investigators as conditions warrant. The initial receipt of any complaint or allegation must be handled by an OIG special agent. No other OIG employees are authorized to receive complaints or allegations on behalf of the OIG.

All matters significant enough to require a response are monitored until the necessary resolution action is planned or taken. Allegations with limited specificity or merit may be held in abeyance until further specific details are reported. Complaints are analyzed to identify trends which should be considered in the audit and investigative planning processes.

Fraud is a false representation about a material fact. It is any intentional deception designed to unlawfully deprive the United States or EPA of something of value or to secure for an individual a benefit, privilege, allowance, or consideration to which he or she is not entitled.

Waste involves the taxpayers not receiving a reasonable value for money in connection with any government-funded activities due to an inappropriate act or omission. Most waste does not involve a violation of law; rather, waste relates primarily to mismanagement, inappropriate actions, and inadequate oversight.

Abuse involves behavior that is deficient or improper when compared with behavior that a prudent person would consider reasonable and necessary business practice given the facts and circumstances. Abuse also includes misuse of authority or position for personal financial interests or those of an immediate or close family member or business associate. Abuse does not necessarily involve fraud or violations of laws, regulations, or provisions of a contract or grant agreement.

The purpose of the EPA OIG Hotline is to receive complaints of fraud, waste, or abuse in EPA programs and operations including mismanagement or violations of law, rules, or regulations by EPA employees or program participants.

Please be as specific as possible. Provide relevant names, dates and times, locations and, where appropriate, include the name of the contractor or grantee, and contract or grant numbers, and award dates.

Minor incidents, such as, minor time and attendance abuse, or misuse of Government property should be reported to appropriate program managers. Personnel matters involving requests for individual relief should be handled through the appropriate grievance process with management, and offices of personnel, equal employment and civil rights. For other questions and concerns not involving fraud, waste, or abuse in EPA programs, please see these helpful Resource Links on our About webpage.

Complaints Made by EPA Employees

In accordance with section 7(b) of the Inspector General Act of 1978, Exit as amended, the OIG shall not, after receipt of a complaint or information from an EPA employee, disclose the identity of the employee without the consent of the employee unless the Inspector General determines such disclosure is unavoidable during the course of an investigation. Any identifying information is confidential source material, and OIG employees must not disclose such information except to other OIG employees who have a need to know in connection with their official duties.

Complaints Made by Other Persons

If you do not wish to disclose your identity, you may remain anonymous when contacting the OIG. However, please keep in mind that anonymity may impede a quick or thorough investigation or the success of a later prosecution.

The Whistleblower Protection Enhancement Act of 2012 (WPA) and the Whistleblower Protection Act of 1989 Enhanced by the Act of 2012 provides protection rights for Federal employees against retaliation for whistleblowing activities. Under WPA, Federal employees may seek whistleblower protection from the Office of Special Counsel (OSC) and the Merit Systems Protection Board (MSPB). OSC is an independent executive agency whose responsibilities include investigating whistleblowers' complaints and litigating cases before the MSPB. MSPB has the authority to enforce their decision and to order corrective and disciplinary actions. Actions ordered can include restoring one's job, reversing suspensions, taking disciplinary action against a supervisor, and reimbursing attorney fees, medical and other costs, and damages.

Employers subject to the provisions of the above statutes may not discriminate against any employee who engages in whistleblowing activities related to the above statutes. The Department of Labor has found that Federal employees may be covered by these protections. Complaints may be filed with the Department of Labor's Occupational Safety and Health Administration (OSHA). 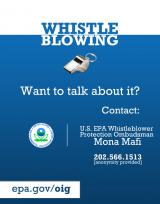 You may download or print the OIG Whistleblower Protection Ombudsman poster (8.5 x 11 PDF).

Role of the Whistleblower Protection Ombudsman

The Whistleblower Protection Enhancement Act of 2012 Exit was signed into law on November 27, 2012. The Act strengthens protection for federal employees who blow the whistle on waste, fraud, and abuse in government operations.

Whistleblower disclosures can save lives as well as billions of taxpayer dollars. They play a critical role in keeping our Government honest, efficient, and accountable. Recognizing that whistleblowers root out waste, fraud, and abuse, and protect public health and safety, federal laws strongly encourage employees to disclose wrongdoing. Federal laws also protect whistleblowers from retaliation.

​Any reported disclosures are reviewed by the U.S. Office of Special Counsel Exit. OSC will evaluate the allegation(s) to determine whether it fits within those types of allegations listed above and whether it is substantially likely that any such allegation can be proven.

If OSC determines that the substantially likely standard is met, OSC will refer the matter back to the originating agency for investigation by the Inspector General. The IG will submit a report of its findings to OSC and the whistleblower gets to submit comments on this report. OSC will make comments on the IG report and recommendations based on the IG’s findings before sending it to the President and the appropriate congressional oversight committee(s).

It is a prohibited personnel practice for management to retaliate against whistleblowing federal employees. OSC receives, investigates, and prosecutes allegations of prohibited personnel practice, with an emphasis on protecting federal government whistleblowers and other complainants. The federal workforce has been protected under the Whistleblower Protection Act of 1989. That law, however, contained loopholes and was open to interpretations that were contrary to the interests of whistleblowers. Congress passed the Whistleblower Protection Enhancement Act of 2012 to close these loopholes and clarify the interpretations, strengthening protections for whistleblowers.

The FY 13 National Defense Authorization Act contains provisions that essentially extend whistleblower protections, now applicable to Federal employees, to private sector based Federal contractors and grantees. These provisions, as applicable to DOD are final. For the rest of the Federal government, it is a four-year pilot program.

You can choose to email the Hotline at: OIG_Hotline@epa.gov to report fraud, waste, abuse and mismanagement to EPA's OIG.

The EPA's Office of Inspector General is a part of EPA, although Congress provides our funding separate from the agency, to ensure our independence. We were created pursuant to the Inspector General Act of 1978, as amended Exit.