Understanding the Science of Ocean and Coastal Acidification

The Industrial Revolution’s Effect on the Global Carbon Cycle

Not only do higher atmospheric concentrations of carbon dioxide alter the Earth’s climate, they also shift ocean chemistry. This phenomenon is due to the fact that carbon dioxide in the air can dissolve into bodies of water. 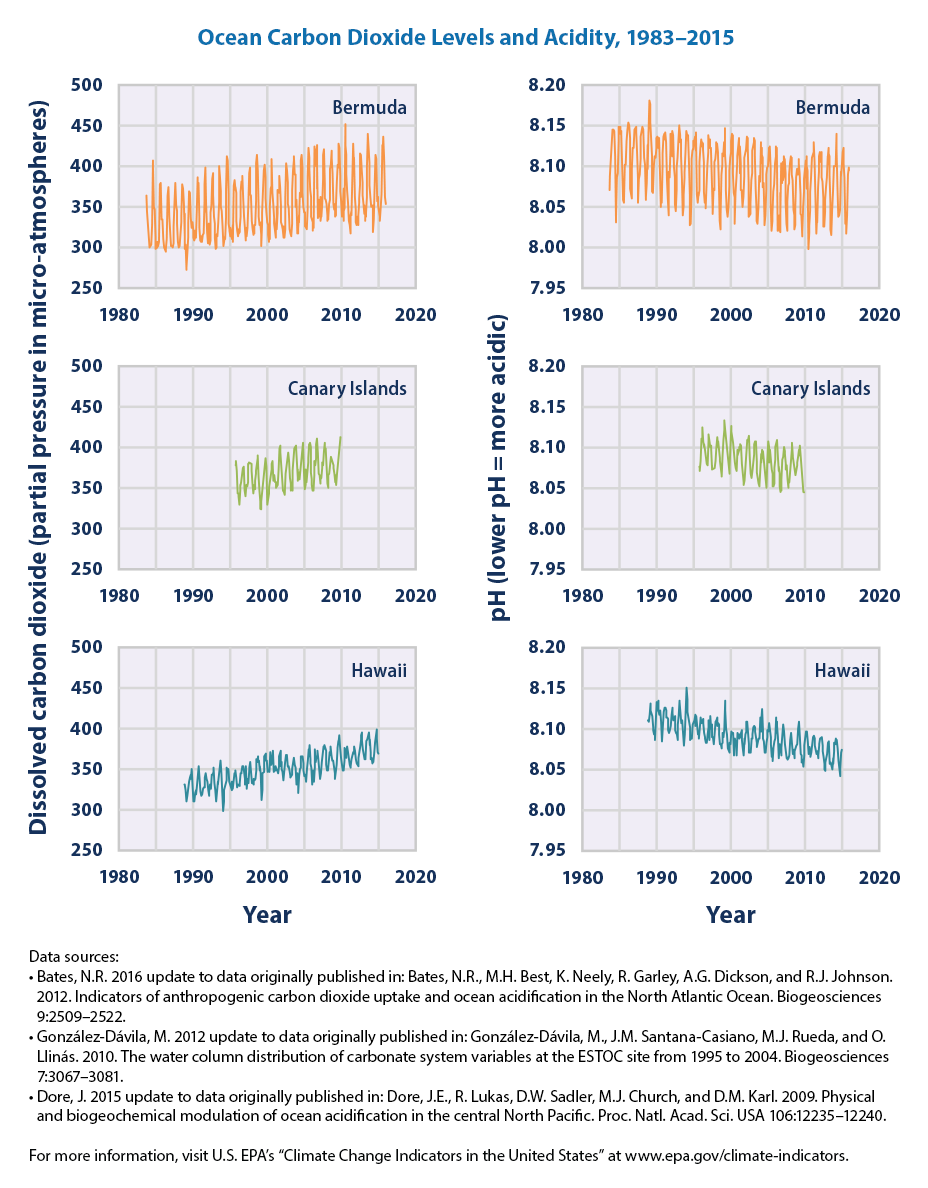 carbonic acidA weak acid with the formula H2CO3. Carbonic acid can be further transformed to bicarbonate

carbonateCO32- ions. These four different forms of carbon (dissolved carbon dioxide, carbonic acid, bicarbonate, and carbonate) exist in balanced proportions in seawater. As more carbon dioxide is added to seawater, the balance shifts and carbonate is lost as it is transformed to bicarbonate due to increasing acidity.

How Acidity is Measured: pH 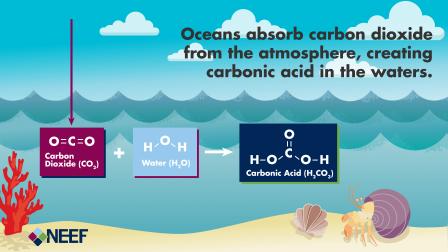 Carbon dioxide molecules from the air react with water molecules to form carbonic acid. Graphic developed by our partner the National Environmental Education Foundation (NEEF).The acidity of a liquid is reported as pH

Prior to the Industrial Revolution, average ocean pH was about 8.2. Today, average ocean pH is about 8.1. This might not seem like much of a difference, but the relationship between pH and acidity is not direct. Each decrease of one pH unit is a ten-fold increase in acidity. This means that the acidity of the ocean today, on average, is about 25% higher than it was during preindustrial times.

Acidity and Availability of Shell-forming Calcium 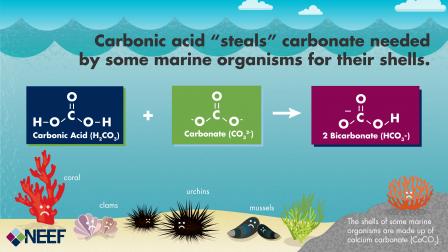 Carbonic acid that forms in water decreases the avialability of carbonate that marine life needs to build shells and skeletons. Graphic developed by our partner the National Environmental Education Foundation (NEEF).

The acidity of a liquid results from its concentration of hydrogen ions, which is typically measured and reported as pH. Courtesy of WHOI.to the atmosphere when fossil fuels are burned, and excess nutrients contribute to acidification in coastal waters when algal blooms

algal blooms The rapid and often excessive growth of one or more species of algae, typically in a lake or coastal waters peak and die.

Burning fossil fuels for energy releases water and carbon dioxide as the main byproducts, but nitrogen oxides and sulfur dioxide are also released in smaller amounts. These two acid-forming compounds fall back to Earth’s surface. They can land in coastal waters directly, or more often mix with water in the atmosphere before falling as acid precipitation, like acid rain. Acid rain typically has a pH between 4.2 and 4.4.

The elements nitrogen and phosphorous are essential nutrients for living things. For this reason farmers, homeowners, and gardeners supply nitrogen and phosphorous to crops, lawns, and gardens to stimulate plant growth. However, water can carry excess nutrients down streams and into coastal waters. Agricultural activities are a major source of nutrients to coastal waters, but other sources include 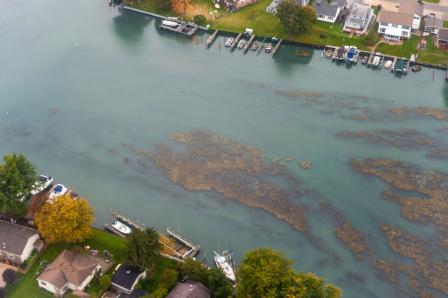