The Chesapeake Bay is the largest estuary in the United States and the third largest in the world. The Chesapeake Bay watershed encompasses the entire District of Columbia, as well as parts of six states: Delaware, Maryland, New York, Pennsylvania, Virginia, and West Virginia. Nitrogen and phosphorus loadings to the Chesapeake are a regional water quality concern.

Restoration efforts to improve water quality in the Chesapeake Bay include reducing pollution, restoring habitats, managing fisheries, protecting watersheds, and fostering stewardship through communication and outreach programs. In May 2009, President Obama issued an Executive Order to recognize the Chesapeake Bay as a national treasure and request the federal government to lead a renewed effort to restore/protect the Chesapeake Bay and its watershed. This effort resulted in recommendations for improvement, action plans, and progress reports, as well as EPA releasing a final TMDL (or "pollution diet") in December 2010 to limit the amount of nitrogen, phosphorus, and sediment pollution discharged into the Chesapeake Bay and its tributaries. In May 2010, EPA published guidance for managing federal lands in the Chesapeake Bay watershed. The guidance provides information on proven and cost-effective tools and practices for nonpoint source implementation on federal lands and at federal facilities. Even though the vast majority of land in the Chesapeake Bay watershed is nonfederal land, the same set of "proven cost-effective tools and practices that reduce water pollution" are appropriate for all land managers. 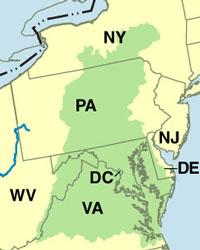