What are algal toxins?

Algal toxins are toxic substances released by some types of algae when they are present in large quantities (blooms) and decay or degrade. High nutrient levels and warm temperatures often result in favorable conditions for algae blooms to form. These blooms can be identified as floating mats of decaying, bad-smelling and gelatinous scum. One type of algae, cyanobacteria (also referred to as blue-green algae), naturally occurs in all freshwater ecosystems. When algae blooms form and cyanobacteria degrade, many release algal toxins that can be harmful to aquatic and human life. 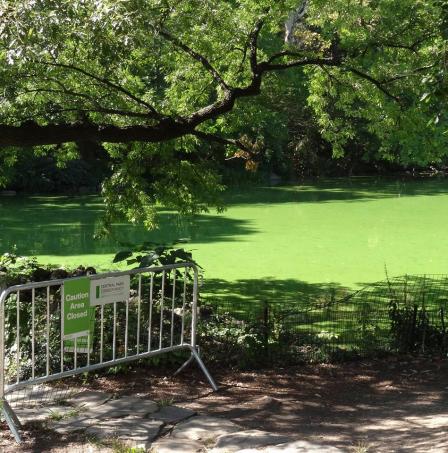 This lake in Central Park has an algal bloom with elevated levels of toxins. Photo: Brad Wenskoski.

Why is it important to evaluate algal toxins?

Although there are relatively few documented cases of severe human health effects, exposure to cyanobacteria or their toxins may produce allergic reactions such as skin rashes, eye irritations, respiratory symptoms and in some cases gastroenteritis, liver and kidney failure or death. The most likely pathway to exposure for humans is through accidental ingestion or inhalation during recreational activities in lakes, rivers and bays. While many varieties of cyanotoxins exist, the one believed to be the most widespread of these toxins is microcystin. Microcystin is a potent liver toxin and possible human carcinogen. Cyanotoxins can also kill livestock and pets that drink affected waters. Fish and bird mortalities have also been reported in water bodies with persistent cyanobacteria blooms.

What can algal toxins tell us about the condition of water?

There is much still to be learned about algal toxins in lakes, rivers and bays. Their presence tells us that a waterbody is most likely stressed by high levels of nutrients such as nitrogen and phosphorus, that risks to the recreational uses of the waterbody and to human and animal health are possible and that related problems, such as low dissolved oxygen due to the decomposition of algal blooms, are likely to also occur.