made in June as described below. The 2015 dead zone size is above the five-year average (14,024 sq km). It is also three times larger than the Hypoxia Task Force Goal of 5,000 square kilometers.  Researchers suggest that heavy rains in June and high river discharges in July may provide an explanation for the larger zone measurement. You can read the Louisiana Universities Marine Consortium (LUMCON) press release here Exit and the National Oceanic and Atmospheric Administration (NOAA) press release here Exit.

NOAA and the United States Geological Survey (USGS) released their 2015 forecast for the summer hypoxic zone size in the Northern Gulf of Mexico on June 17, 2015. You can find the full press release here Exit. Scientists are expecting the 2015 area of low oxygen, commonly known as the 'Dead Zone,' to be approximately 5,483 square miles or about the size of Connecticut –the same as it has averaged over the last several years.

The 2014 "Dead Zone" measured 13,080 square kilometers (5,052 square miles) as of Aug 1, 2014. This size fell within the predicted range made in June described below. The 2014 dead zone size is below the five-year average (14,353 sq km), but still well above the Hypoxia Task Force goal of 5,000 square kilometers. You can read the LUMCON press release here Exit and the NOAA press release here Exit.

The hypoxic zone in the northern Gulf of Mexico is an area along the Louisiana-Texas coast, where water near the bottom of the Gulf contains less than two parts per million of dissolved oxygen, causing a condition referred to as hypoxia. 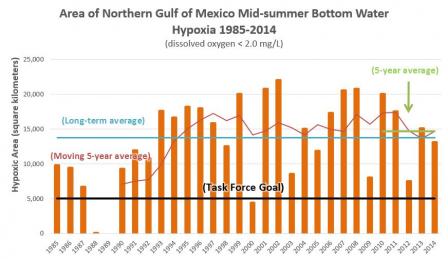 Information about the size of the hypoxic zone can be obtained from NOAA’s Gulf of Mexico Hypoxia WatchExit and the LUMCONExit, which is supported by NOAA’s NGOMEXExit.

The Gulf of Mexico Hypoxia WatchExit evolved as a cooperative project among NOAA’s National Marine Fisheries Service (NMFS), the National Coastal Data Development Center (NCDDC), and the CoastWatch - Caribbean/Gulf of Mexico - Regional Node. The objective of Hypoxia Watch is to develop new near-real time data and map products using shipboard measurements of bottom-dissolved oxygen and disseminate them over the Internet. Access measurementsExit taken from 2001 to the current season.

The 2013 area of low oxygen in the Gulf of Mexico, commonly known as the hypoxic zone or "Dead Zone," was 15,120 square kilometers (5,800 square miles), which was smaller than predicted. Researchers suggest that winds may have contributed to more mixing and a smaller zone measurement. The size of this year’s hypoxic zone is about double the measured size of the zone in 2012, when summer drought conditions in the Mississippi River Basin contributed to greatly reduced nutrient outputs into the Gulf of Mexico. This year’s zone of oxygen-depleted bottom-water was above both the long-term average and also the five-year average.