The Sporlan Valve Plant 1 Superfund Site was first developed as a refrigeration valve manufacturing facility in 1939. Continuous additions were constructed until 1968 when the final addition was added, bringing the total area of the factory to 80,000 square feet. In 2011, the brick building and concrete slab were demolished and the site was cleared. Over the course of the facility’s history, a release of trichloroethylene (TCE) to the ground occurred. Environmental assessments conducted between 2003 and 2006 at the site concluded that soil and groundwater beneath the site had been impacted by this chemical.

The site is located at 611 E. 7th Street, Washington, Franklin County, Missouri, 63090. The site is centrally located within the city of Washington and is approximately a half mile from the Missouri River.

The primary contaminant of concern is trichloroethylene, an industrial solvent more commonly known as TCE. TCE poses a potential human health hazard to the central nervous system, kidney, liver, immune system, male reproductive system, and developing fetus. TCE is characterized by EPA as “carcinogenic in humans” by all routes of exposure.

TCE associated with the site has been detected in shallow monitoring wells and nearby residential homes. Existing monitoring well data indicates TCE contaminated groundwater is traveling away from the release point(s) in shallow groundwater, primarily towards the south and southeast.

Other contaminants of concern at this site include benzene, vinyl chloride and 1,1-DCE. 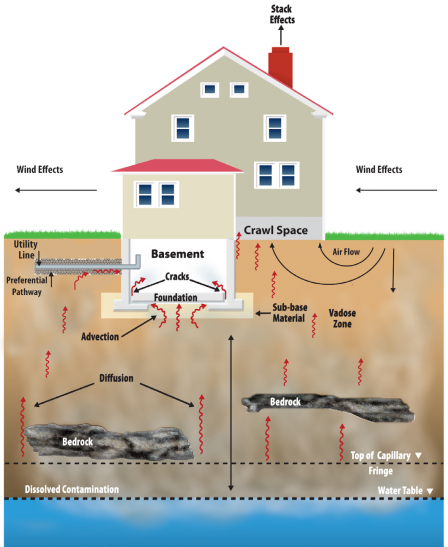 FIGURE SHOWING VAPOR INSTRUSION INTO A HOMEDue to the presence of TCE in shallow groundwater under residential properties in the area, there exists the potential for TCE vapor intrusion into homes. Because of this, EPA is proposing a series of actions at the site. These actions will include sampling for TCE in homes, and installation of vapor mitigation systems in homes determined to be impacted, or at risk of being impacted, by TCE vapors.

Vapor intrusion is a way that volatile chemicals in soil and groundwater can enter and accumulate inside buildings. Volatile chemicals are a class of chemicals that tend to evaporate easily into the air. Normally, if these chemicals evaporate into outdoor air, they dissipate and do not pose health risks. Vapor mitigation systems that remove these vapors from home interiors can be a reliable and effective way to keep such vapors from accumulating, so that they do not pose health risks.

EPA Region 7 has issued a Unilateral Administrative Order to SV Land, LLC, which purchased the former manufacturing property in 2004, requiring the company to design, install, and confirm the effectiveness of vapor mitigation systems at affected homes in the area. Owners of potentially affected properties have been contacted by EPA.