[NOTICE] EPA is announcing the availability of the Second External Review Draft of the Integrated Science Assessment for Sulfur Oxides – Health Criteria for public review and comment and an independent peer review. [Federal Register Notice: December 9, 2016]

Sulfur dioxide (SO2) is one of a group of highly reactive gases known as "sulfur oxides." Emissions of SO2 have declined by approximately 70% for all major sources since 1990 as a consequence of several U.S. air quality regulatory programs. Coal fired power plants remain the dominant sources by nearly an order of magnitude above the next highest source (coal-fired boilers), emitting 4,500,000 tons of SO2 annually. Smaller sources of nationwide SO2 emissions include industrial processes such as extracting metal from ore, petroleum refining, and chemical processing.

SO2 is linked with a number of adverse effects on the respiratory system, particularly for exercising asthmatics. In 2010, EPA revised the primary (health-based) standard by establishing a one-hour standard at a level of 75 parts per billion (ppb).

EPA's NOx and SOx research efforts are focused on improving emissions estimates, determining health and ecological effects, and improving modeling capabilities. The Clean Air Act requires EPA to periodically review the science for six major air pollutants, including NOx and SOx. EPA's National Center for Environmental Assessment develops Integrated Science Assessments (ISAs) that summarize the science related to the health and ecological effects caused by these pollutants. ISAs provide a comprehensive review of the policy-relevant scientific literature published since the last National Ambient Air Quality (NAAQS) review and are a critical part of the scientific basis for establishing the NAAQS.

For the draft assessment of sulfur oxide - health criteria (2016), EPA is using the Health and Environmental Research Online (HERO) database to augment the underlining literature that will support the final assessment.

HERO is a searchable database of more than 1.6 million scientific studies and other references used to develop EPA assessments aimed at understanding the health and environmental effects of pollutants and chemicals. 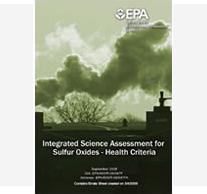