Lead (Pb) is a highly toxic metal that is known to be harmful to human health. The scientific evidence shows that lead exposure can cause cognitive function decrements in children (as measured by reduced IQ, decreased academic performance and poorer performance on tests of executive function). There is no evidence of a threshold for cognitive effects in children, which means there does not appear to be a level of exposure below which this health effect is not observed. In addition, lead exposure can cause decreased attention, increased impulsivity and hyperactivity and may also lead to conduct disorders in children and young adults. Other health effects of lead exposure include hypertension, harmful effects on sperm, the blood and blood forming organs, and the immune system.

Since the 1980's, EPA and its federal partners have phased out lead in gasoline, reduced lead in drinking water and industrial air pollution, and banned or limited lead used in consumer products such as residential paint. As a result of these regulatory efforts, levels of lead in the air have decreased by 97% between 1980 and 2010. Blood Pb levels have also decreased dramatically among U.S. children and adults over the past thirty-five years; based on the 2009-2010 National Health and Nutrition Examination Survey, the median blood lead level for the U.S. population is 1.1 micrograms per deciliter (µg/dL).

The Clean Air Act requires EPA to periodically review the science for six major air pollutants, including lead. EPA's National Center for Environmental Assessment develops Integrated Science Assessments (ISAs) that summarize the science related to the health and ecological effects caused by these pollutants. ISAs provide a comprehensive review of the policy-relevant scientific literature published since the last National Ambient Air Quality (NAAQS) review and are a critical part of the scientific basis for establishing the NAAQS. EPA released the Integrated Science Assessment for Lead Final Report in June 2013.

While working on the assessment of lead (2013), EPA used the Health and Environmental Research Online (HERO) database to augment the underlining literature that support the ISAs assessments.

HERO is a searchable database of more than 1.6 million scientific studies and other references used to develop EPA assessments aimed at understanding the health and environmental effects of pollutants and chemicals. 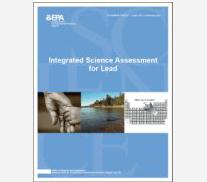